He couldn’t look more out of place. Decked out in a cream-colored, straw hat that looks more like an odd-fitting sombero, British punk troubadour Billy Bragg wanders around the town of Okemah in Okfuskee County, Oklahoma. 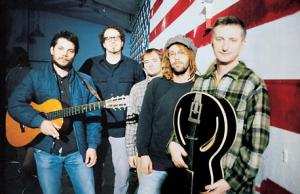 Shadowed by a camera crew as he talks with the town’s locals, Bragg is looking for any earthly connections to the town’s forgotten famous son, Woody Guthrie. The house that Guthrie grew up in is long gone, as well as much else that would prove the folk music icon lived there apart from a giant water tower that reads, “Home of Woody Guthrie.”

“I’m on a search,” Bragg tells a concert crowd later. “I’m searching for the spirit of Woody Guthrie.”

Thankfully, the newly released BBC documentary, “Man In The Sand,” takes us along for the journey, learning about Guthrie, visiting the places that he stopped in America’s heartland and giving an insider’s view of how Bragg and company recorded the albums.

What the 96-minute “Man In The Sand” offers is two stories often precariously inter-woven. The first storyline is a biography of Guthrie that’s told through Bragg’s travels, old photos and narration by Guthrie’s daughter Nora, who presided over the project. The movie’s second focus is how both “Mermaid Avenue” albums were made, with Bragg taking a leading role. Both ultimately say a lot about Guthrie, his modern-day collaborators and the songs.

I must admit that at first, the selection of Bragg to helm the project didn’t make sense to me. My misgivings were nothing against Bragg himself, but didn’t it bother anyone that he’d be singing the words of the man who in the eyes of many, is the consummate American folk singer; the rambling, train-hopping, poet-hobo of the Dust Bowl era. Didn’t anyone hear Bragg’s unrepentant British accent?

Although the first album’s release silenced any doubters, including me, Nora Guthrie said that she chose Bragg because of his similarities to her father, politically as well as musically.

Perhaps feeling sensitive about his British-ness, in addition to needing a backup group, Bragg invited Wilco to collaborate on the records.

Most of the lyrics that were used on the albums date from the period during and after World War II and before Guthrie died from Huntington’s Chorea, a hereditary nerve disease, in 1967. Guthrie eventually was unable to play guitar, but he continued to write songs until his death.

For this project, Bragg and Wilco cherry-picked their favorites among the 2,000 lyrics in the archive. The resulting albums, which are easily the best things that either Bragg or Wilco have released to date, are not a tribute record but closer to collaboration separated by some 30 years.

The film firmly establishes a fuller appreciation of Guthrie’s vast songwriting gifts, especially his emotional side. Despite the road warrior myth, Guthrie also wrote songs that mirrored the human experience — dealing with love, lust, sadness, humor, drunkenness and family life. Beyond writing “This Land Is Your Land” and other proletarian political anthems, he was also capable of composing songs that served as a lurid love letter to Ingrid Bergman, a slap on the back for Yankee great Joe DiMaggio or a plea for a flying saucer, among others. Of course, both “Mermaid Avenue” albums also have plenty of songs in which Guthrie targets fascists and fat cats.

In these records, Bragg said that he set out to prove that Guthrie was America’s greatest lyrical poet since Walt Whitman, and he succeeds in making a tough case.

The film also gives a fascinating peek on how the creative process behind the albums flowed. The sessions took place in Chicago and Dublin with the band and Bragg swapping songs and jamming with slide guitarist Corey Harris. (In a separate session, Natalie Merchant contributed vocals to a pair of songs with Bragg).

While some songs were born full-formed, others developed from the simplest idea. The film captures Wilco leader Jeff Tweedy leading the group through the fully realized country-rock of “California Stars.” Later, Bragg is seen demo-ing a solo version of “She Came Along To Me” with a dobro before it skips to him recording it with a full-band arrangement.

The most satisfying glimpse is witnessing the mournful “At My Window Sad And Lonely,” blossom from Tweedy pacing around studio, singing and strumming the song’s simple chords and then evolving into its recorded version backed by a haunting organ but retaining Tweedy’s acoustic guitar melody.

Besides watching the creativity, it’s also the rare chance to catch the eye contact between the musicians that makes these shots worthwhile. As Martin Scorsese pointed out about moments in “The Last Waltz,” crowds at a concert rarely see band members’ glances and the dynamics that lay underneath. In “Man In The Sand,” you can’t help but feel a bit uneasy watching the blank glares that Bragg and Tweedy exchange when the other is singing.

The documentary’s one major flaw is its unwillingness to delve deeper into its key source of drama: the creative friction that emerged between Bragg and Tweedy prior to the first album’s release.

Intra-group tension was hinted at in their conversations throughout the footage of the recording process, but the first real sign that things had turned sour was over how some of the album’s tracks were to be mixed and what would be released.

But instead of discussing the conflicts in front of the camera, the albums’ producer and others do most of the explaining while the audience is left with little more than guarded words, blank stares and the shrugging of shoulders from the main participants. The omission of the acrimony is understandable, but it does leave the audience to piece together what happened.

Although it’s never directly discussed in the film, according to some published reports, the disagreements were such that attorneys became involved. With this in mind, it perhaps sheds some light as to why the pairing never toured together — as was originally planned — and why Wilco recorded several songs without Bragg for the second record.

When Bragg does address the issue, he chalks the disagreements up to the fact that this is the first time that he and Tweedy have had to compromise on their songs.

By the film’s end, all appears forgiven as the film fast forwards to an outdoor concert shortly before the first album was released. During the show, Wilco invites Bragg onstage for a raucous run-through of “Hoodoo Voodoo.”

Although about a dozen of the 40 finished songs mentioned in the film have not been released, there’s no word on whether Bragg and Wilco would release a third installment or if they’ll ever will hit the road together. Both look unlikely given the fact that both have their own new albums on the way.

However, the archive announced plans for an album of Guthrie’s children’s songs. In addition to Bragg, Frank Fuchs, “Ramblin'” Jack Elliot and others are expected to contribute songs.