Bob Dylan is 60 years old on May 24, but despite a four-decade reign as rock’s greatest songwriter, the man is as much a mystery now as he was when he first stepped onstage.

Emanating from the achievements of Dylan’s artistic genius, his mystique is a crucial element of his image. Since that Minnesota boy first started calling himself Bob Dylan, the mystery has been part of the creation. In the early days, the mystery was fed by Dylan’s habit of fictionalizing his background — claiming he was an orphan and traveling in carnivals as an adolescent — or through his steadfast refusal to answer reporters’ questions directly. Later, the mystique was fed by the brilliant songs that he kept coming up with.

Whether it’s fortune, curse or both, all this mystery still inspires a deluge of curiosity. For all the thousands of times that Dylan stood on stage and sang to the audience the most famous chorus he ever wrote, “How does it feel?” it surely rivals all the times we’ve collectively asked the same of him: What’s it like being the ‘voice of a generation’? How did you write your songs? Who are you?

Answering those questions and uncovering the man behind the myth is the primary task of two new books, “Down the Highway: The Life of Bob Dylan” by Howard Sounes and the latest edition of Clinton Heylin’s biography, “Bob Dylan: Behind the Shades Revisited.” The tomes were released this month to coincide with Dylan’s birthday. And despite the fact that much of the puzzle that is Dylan’s life is still missing — owing to the fact that Dylan declines to participate — both books paint a similar portrait of an ever-evolving artist, even though the authors have divergent styles and emphasize different aspects of Dylan.

Although the term “Dylanology” was coined by someone who delighted in picking through Dylan’s garbage in the early ’70s, the word has come to represent the quasi-scholarly work of dissecting Dylan and his art. Over the years, several authors have tried their hand at writing the definitive biography, most notably Robert Shelton, Paul Williams, Bob Spitz and Anthony Scaduto. 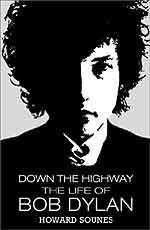 Heylin’s 1991 effort came the closest yet, even though other authors have received more cooperation from Dylan himself. This new edition, despite some persistent flaws and shaky conjectures, succeeds in moving the book closer still to the understanding Dylan. Heylin, who’s the Andy Rooney of Dylanologists, continues to set his sights on understanding and explaining what’s in the master’s mind while doling out the facts and adding his two cents at every step. Heylin’s musings dwell on the music while drawing out the inner meanings (or possible meanings) in each period in Dylan’s life.

The new Dylanologist on the block, Sounes, a former reporter turned author, has written a familiar story that’s bursting with new snippets of information, including a couple of surprises that his colleagues seem to have missed. Sadly, while Heylin’s book is consumed by the music and its creator, Sounes seems to ignore the music for the most part and focuses on the man instead.

The differences between the two books are clear from the outset. Sounes’ 400-page book is a thoroughly researched, albeit blandly, written celebrity profile. Heylin’s 600-page book is an analytical biography distilled through the author’s playful writing style.

The strong points of Sounes’ book are in the new sources that he’s tapped into. While other Dylan bios have focused primarily on interviews, Sounes puts his competitors to shame by digging up loads of court documents, property records and other official paperwork. (Even though doing this strikes me as an invasion of privacy, you can at least admire Sounes’ tenacity to do the biographer’s job and find out more.)

Armed with that kind of information, Sounes is able to not only discuss Dylan’s reported financial status and the properties that he allegedly owns, but also fills out his own portrayal of Dylan. While delving into the extended litigation with his former manager Albert Grossman and then the lawsuit filed by his former road manager/friend Victor Maymudes, Sounes bares out what Dylan is like to work with and for.

Sounes also scored in netting several interviews from people that had never cooperated with prior biographers as well as getting fresh interviews from other primary sources. He garnered some fascinating and insightful comments from unnamed family members; Sally Grossman, the wife of Albert Grossman (and the woman who appears with Dylan on the cover of “Bringing It All Back Home”); a painter friend from Dylan’s years in Woodstock, N.Y.; and members of the Band. The interviews, often imbued with personal anecdotes, serve to put the reader closer to understanding Dylan. In particular, his interview with Sally Grossman casts new light on Dylan’s famous motorcycle accident in 1966. Claiming to be a witness shortly after the fact, Sally Grossman told Sounes, as others have theorized, that Dylan’s injuries from the accident were not as bad as some stories reported.

Sounes’ biggest coup, however, and the one that landed him in newspaper headlines around the world last month, was his revelation that Dylan was secretly married to one of his former backup singers, Carol Dennis, from 1986 to 1992 and fathered her child.

In a press statement in early April 2001, Dennis acknowledged it all, but accused Sounes of misrepresenting Dylan’s and her intentions to shield the child from the media spotlight by keeping the marriage a secret.

“Bob and I made a choice to keep our marriage a private matter for a simple reason–to give our daughter a normal childhood,” Dennis said in her statement. “To portray Bob as ‘hiding his daughter’ is just malicious and ridiculous,” said Dennis. “That is something he would never do. Bob has been a wonderful, active father to (the child).”

Sounes fired back that he’s the one being misrepresented. He said that he never called into question Dylan’s parenting skills nor his reasons for keeping mum on the marriage. 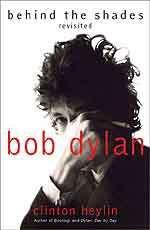 In his book, Heylin contends that he knew about Dylan having a child with one of his backup singers in 1991 but chose not to write about it to “respect their right to privacy.” Whether regretting his previous decision or feeling that the secret is already out, he ups Sounes’ ante by revealing that Dylan has also had two other secret children. In his book, Sounes said that he couldn’t find proof of other children besides Dennis’ child.

Although it lacks the new sources and the scandal of Sounes’ book, Heylin’s book remains the top dog of Dylan biographies if only because Heylin has labored to create a coherent yet interesting story. Sounes’ book doesn’t have the ambition and the critical analysis of Heylin’s, even though Heylin sometimes doesn’t know when to turn it off.

One of the great selling points for Heylin’s book is the artfulness of his writing. Whether using insightful quotes from his interviews, his own clever prose or including snippets from other writers, “Behind The Shades Revisited” is never a laundry list of facts. As an example, below is a review that Heylin included of Dylan’s performance nadir sometime in the early ’90s:

“Dylan now resembles nothing so much as an alcoholic lumberjack on a Saturday night out in some Saskatchewan backwater, staggering around the stage here in a huge plaid jacket and odd little hat. The band, meanwhile, have all the charisma of a death squad in some bandit republic … Dylan, hilariously, doesn’t give a f***.”

The book has its faults, though. One of the drawbacks, as with many of the other Dylan bios, is that it caters to Dylan fans instead of a broader audience. The book sometimes seems to come across as an extended monologue that Dylan fanatics would have over coffee, including all the accompanying inside jokes and assumed knowledge.

Also, it seems that Heylin needs to find a good fact-checker. The book contains several puzzling errors, made all the more confusing by the fact that this is an updated edition of a 10-year-old book. In one example, Heylin writes that Dylan left his hometown of Hibbing, Minn., to attend the University of Minneapolis. (Dylan actually attended the University of Minnesota).

A much more disturbing error surrounds the birth of Dylan’s third child, Samuel. Other biographers, including Sounes, make reference to the boy’s birth around the time that Dylan’s father died in 1968. Heylin makes a peculiar insinuation about the baby and its fate after he remarks that Dylan “seemingly” returned from his father’s funeral to see the baby’s birth. Heylin adds, “However, no such son was cited in the 1977 divorce proceedings (with his first wife), nor is there any record of him being bar mitzvahed.”
Oddly, Samuel Dylan is mentioned near the end of the book when he was reportedly bar mitzvahed in Israel.

Another aspect that doesn’t sit well is Heylin’s use of speculation, sometimes backed by little first-hand verification. For example, his statements about Dylan’s alleged drug use in the ’60s are suspect in that it’s built mostly on conjecture. To prove his theory that Dylan might have been “shooting speed or junk,” Heylin reads into a story of Dylan stumbling around a TV station’s green room that a production assistant told another author 30 years afterward. Later, he intimates that Dylan clearing his throat during the recording of a “Basement Tapes” track was evidence that he had snorted something.

Such suggestions without adequate proof undermine the book. It’s valid for him to lay out his theories, but he doesn’t qualify these assumptions enough.

It’s fair to say that writing a biography of Dylan almost requires an author to concoct a few healthy theories. Dylan, his music and his life rarely yield explicit answers.

Taken as a whole, both books bring readers closer to understanding the life of this complex and baffling figure who, in Heylin’s words, is “the preeminent popular artist of the century.” The mystery isn’t gone mainly because the mystery is part of the man.