How the mighty have fallen. It was only a few years ago that Live was the cream of the alternative-rock crop. Their 1994 album, “Throwing Copper,” went multi-platinum and the group won countless accolades, including Rolling Stone magazine’s prestigious Reader’s Poll “Artist Of The Year” award. If you believe the hype, they were going to be the next U2.

But with the release of their fifth album, “V,” the Pennsylvania band has confirmed a theory that’s apparent to anyone who’s listened to their subsequent albums or seen them in concert: The band ‘s pop spark has been doused by their rock star image.

The last time I saw Live lead singer Ed Kowalcyzk, he was strutting across a Minneapolis stage performing opening act duties for Counting Crows in the late summer of 2000. But this wasn’t the Ed Kowalcyzk that MTV audiences had seen throughout the ’90s. This wasn’t the quiet intellectual who wore wire-rimmed glasses and talked up spirituality as he did in the band’s early days. This also wasn’t the bald, Buddha-like singer that lunged bare-chested throughout the group’s “I Alone” video. On that night, we saw Ed Kowalcyzk, rock star. 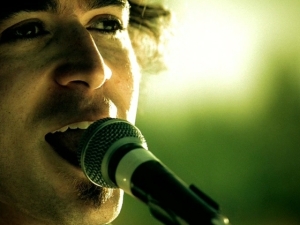 On that warm August night, Kowalcyzk and his bandmates seemed drunk on their own success — playing every one of their songs like it was a new classic. No song was complete without some pelvic gyrations or a Pete Townshend windmill maneuver. During the concert’s encore, the group rubbed next to and grinded next to some groupies who wound up onstage. Come on guys, even Bono knows better. (Read concert review)

But all this extra vanity would be tolerable if the most famous band that ever came out of York, Pa., could still write power-pop songs like they did on “Throwing Copper,” or “Mental Jewelry,” or even “Secret Samandhi.” Instead, their latest, “V,” seems like they’re taking cues from whatever is on hard-rock radio.

Case in point is “Simple Creed.” The tune’s Eastern-tinged riffs hint that there’s something beyond the power chords, but it never arrives. What we do get is Kowalcyzk’s try at replicating Fred Durst’s vocal mannerisms. Great thinking, Ed! Even a guest appearance from Tricky contributes little as his lyrics are pointless.

The next track, “Deep Enough,” is just dumb. The guitar-heavy song, which has the narrator scoring with a girl on a club’s dance floor, features the vivid couplet, “The place was packed/ With sweaty palms, sweaty thongs and sweaty backs.” This and a majority of the album’s other tracks are proof that rather than emulating pop music’s elite, Live has sunk to posing like a bunch of rap-metal wanna-bes.

At the end of “V”, the band tries to de-emphasize their new machismo by concluding with “Overcome,” a sappy, piano hymn that’s been used as a soundtrack for some of the video photomontages of the World Trade Center bombing, and the trite love song, “Hero of Love.” On this last one, Kowalcyzk’s lyrics mix his longtime dabbling in spirituality with his new fondness for being sexually suggestive. What makes this song all the more pathetic is that Kowalcyzk seems to relish making crass innuendoes, like he’s somehow sexually liberating himself. In reality, he’s the home-schooled kid who’s learned a new dirty word.

It’s an odd coincidence that some six years after disbanding cow-punk pioneers, Uncle Tupelo, the band’s co-leaders Jay Farrar and Jeff Tweedy have finally, completely struck out on their own at roughly the same time. But while Tweedy’s now in sole control of his band Wilco (after expelling multi-instrumentalist and songwriting partner Jay Bennett), Farrar has seemingly abandoned his post-Tupelo outfit, Son Volt, for a solo career.

Casting off expectations, Farrar’s solo debut, “Sebastopol,” is a brave dive into ’60s-style musical experimentation and a step away from the alt-country farmland that Son Volt has subsisted on. With the help from members of Superchunk and the Flaming Lips, Farrar has molded his new songs into a mini-“Sgt. Pepper.”

Farrar is still half-mumbling his enigmatic lyrics, but now he has paired his voice to great effect with whirling sounds from diverse instruments like pipe organs, melodicas and sitars.

These new instruments are a ticket to escapism — creating a new sonic environment for the listener. In the case of “Feel Free,” the breezy, keyboard-laden melody creates the feeling that you’re drifting through someone else’s dream. The most plain-spoken song, “Damaged Son,” features a simple guitar figure that is bombarded by waves of what sounds like a computerized orchestra. It could be the closest we’ll come to see Farrar the balladeer.

By mid-album, Farrar temporarily slips back into old habits for the cowboy saga “Barstow,” where he’s joined by a countrified slide guitar and Gillian Welch on harmony vocals.

However, Farrar hasn’t totally abandoned his roots. Peering beneath the album’s rich production, many of these songs probably sprang to life as acoustic guitar demos and retain that framework. The addition of keyboards, strings and guitar effects serve to add new flavors to the structure.

“Caught between two worlds/ Don’t want to be fenced in,” Farrar sings between a chorus of Byrds-like guitars on “Voodoo Candle.” This verse could be construed as Farrar’s musical Declaration of Independence. As “Sebastopol” proves, Farrar has finally freed himself of his reliance on a steel guitar and he is now catching up with his ex-bandmate Tweedy in exploring the glory of keyboards.