With Rage Against The Machine now defunct, chart-toppers like Limp Bizkit inevitably come to mind when people start talking about bands that exemplify the hybridization of rap and rock. But Fred Durst’s days as an MC may be numbered if rapper Mos Def’s latest project lives up to expectations. 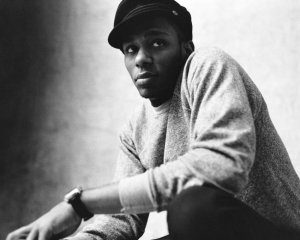 “I’m hip-hop, I’m rock’n’roll,” the New York-based rapper defiantly yelped to the thudding backdrop supplied by his new rock band, Black Jack Johnson, which he introduced at his Tuesday night concert at First Avenue in Minneapolis.

And maybe it’s because of the inflated level of expectation that comes with such a distinguished lineup, or the fact that most of the group’s set was made up of covers, but Durst might not have to worry about his job just yet. Based on this show, Black Jack Johnson is a letdown.

The hour-long set featured only a couple original songs, which doesn’t bode well for the album that Mos and the band are reportedly recording. (The record is set for release sometime in the early part of 2002.) Add to that, the group’s performance itself was under whelming.

After a 45-minute delay, Mos and company hit the stage with the sneaking bass line of Jimi Hendrix’s “Who Knows” — the rapper adding his own rhymes for the slithering verses. The group’s solid yet stoic reading of the song set the tone for the evening. An apt, one-word description for this night would be tame.

Most of the covers got a facelift, but it usually wasn’t for the better. Although Mos was successful in crooning his way through Bob Marley’s “Waiting In Vain,” it was followed by a futuristic blues vamp that was a wandering mess. The music lacked punch and Mos sang lyrics that mashed together choice lines from dozens of blues classics like “I’m A Man” and “Back Door Man.”

Jay-Z’s “Takeover,” now retitled “Rapeover,” was rewritten as a diatribe against the recording industry. Begun with a shimmering, ’80s-style keyboard whirl and a softly-sung chant of “I love rock’n’roll,” the song reverted to the original head-nodding bassline.

Far worse was the band’s rendition of theme to the Batman TV show of 1960s, reforged as “Blackman.” The band was lazy and played the song’s signature melody too slowly. More performance piece than a rap, Mos’ lyrics took police and others to task for racial profiling and discrimination. “Will Blackman survive George Bush?” the rapper asked before urging the crowd to tune in at the “same black time, same black channel.”

A scathing new poem, “War,” focused on similar themes of injustice. Dedicated to U.S. Attorney General John Ashcroft and performed a capella, Mos vented about the parallels between wars overseas and at home, releasing more energy on that cut than any he did with his backing group.

Wearing Doug Flutie’s blue San Diego Chargers jersey and a white towel around his neck, Mos was an authoritative presence on stage — but only when he was rapping. During instrumental passages, Wimbish, who could teach the young rapper about old-school rock theatrics, occasionally gave the show a much-needed jolt of excitement. His eyes closed with a pained expression on his face, the bass player slammed at his instrument with his thumb and fingers to punctuate the hard-hitting rhythm. And when he wasn’t manning the lower end, he was tearing into screechy solos (Wimbish even played the strings with his teeth, a la Jimi Hendrix).

Wimbish was the group’s most valuable player. He got a boost in that respect because the guitar and keyboards were mostly inaudible throughout the evening. It was unclear whether this was due to poor mixing by an engineer or because there was little space for Dr. Know or Worrell to add anything apart from a rhythm fill or two. (Perhaps the most disappointing moment of the night was when Worrell took a brief solo early in the concert and his keyboard lines were so disorienting that it seemed like he wasn’t even playing the same song.)

The major weakness of the concert was that the band members’ full talents were being under-utilized. Besides performing few original songs (all the musicians have contributed music to their other projects), the group typically failed to attack the cover songs with any intensity or originality. Many of the changes to the cover songs were lyrical and the band never strayed from the established melody. At their worst, they were simply a human backing track for Mos’ raps.

The only time that the group was able to flash it’s teeth was after Mos left the stage and the band kicked into the extended jam that concluded the show. Worrell and Dr. Know took a backseat as Wimbish and Calhoun bounced off each other, hammering the morphing groove into shape for several minutes before it evolved into a quick drum and bass take at Living Colour’s big hit, “Cult of Personality.”

Sadly, if this concert represents the best that Mos and the band are capable of, this experiment will do no better than the last time a real rapper hooked up with a rock group: Ice-T and Body Count. That 1991 foray into thrash-metal established little except to prove that black musicians were just as capable of writing inane metal songs.

Unless their content to be the world’s most overqualified cover band, Mos and company need to get to work.

©Copyright 2002 by David Hyland. All rights reserved. This material may not be published, broadcast, rewritten or redistributed.