Both have built reputations as groups that revere rock’s musical roots, but both stand apart from the alt-country scene.

And although both bands continue to share a love of those influences, their new albums demonstrate the groups’ careers are moving in drastically different directions.

Gomez “In Our Gun”

Blame it on punk rock or the prevalence of art schools, but British rock bands since the ’70s have always had an artsy, more progressive approach to music than their American counterparts. The United Kingdom was once home to revivalists like the Rolling Stones, the Yardbirds and the Animals who were responsible for reintroducing the blues to American pop audiences, but getting in touch with roots music now seems to mean discovering David Bowie’s early singles. 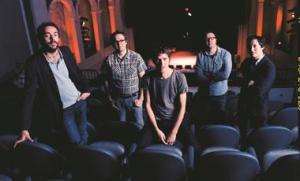 Gomez is the exception to the rule among the current crop of Brit-rock bands. While the quintet’s artistic flair and desire to experiment is as strong as Radiohead’s, their eclecticism is expansive enough to include elements of folk, blues and ’50s jazz.

“In Our Gun” is the group’s third release and is their most heavily and subtlety produced — repeat listening is required to pick up all the nuances. The album’s collection of solid musical hybrids should cause some ears to perk up in America’s rock underground, where the group has failed to win the kind of recognition that they enjoy in their homeland.

The songs on “In Our Gun” unwind themselves musically, each musical turn ventures into surprising new directions.

Quickly swept up in the song’s momentum, “Shot Shot” rumbles with a dense rhythm that features a theremin and Morphine-like baritone saxophones that swell into the record’s most soaring chorus.

The record’s title track is a somber, acoustic guitar-led rallying cry against blindly following social conformity. Despite the lyric’s message, the song doesn’t feel preachy, but remarkably like an old standard sung by a campfire with an accordion and low-key background vocals. The song gently sputters to a conclusion before being mauled by one of the many frantic dance-music interludes that are inserted throughout the record.

Their closest brush with Radiohead’s space-rock heights comes with the sparkle of the electric guitars on “1000 Times.” Less symphonic than any creation by their Oxford, England rivals, the song’s pairing of guitars and chilly vocals mirrors moments of “OK Computer.”

A useful mantra for an artist might be “don’t look back.” But if anything, “In Our Gun” shows that forward-thinking artists need not view roots music as a purists’ genre but as an underutilized reservoir for sounds and musical ideas that can inform their creations.

What is wrong with Cracker leader David Lowery?

Once the chief songwriter behind the seminal, country-ish Camper Van Beethoven, Lowery’s ability to write catchy songs rife with droll humor and littered with cultural touchstones, won him respect in alt-rock circles and led his current band to platinum success in the mid-’90s.

But since then, Lowery’s muse has deserted him and the group vanished off radar screens after its last couple of albums tanked. To be fair, Lowery was enlisted to produce the Counting Crows’ last record, “This Desert Life.” But the association only reinforced the notion that their fortunes are heading in opposite directions. While his one-time proteges have continued to evolve as songwriters and muscle their way on the radio, Lowery’s output has become an increasing disappointment in all respects.

With these songs as evidence, Lowery is no longer able to cultivate a hook or melody. The songs are a bunch of guitar chords played behind Lowery’s hum-drum vocals. As a lyricist, Lowery can barely manage to write more than one verse per song. And in those verses, he doesn’t tie his screwball imagery together with any of the wit that he’s shown in the past.

Many of the songs are designed as sing-alongs that never take off. “Shine” starts strong with overlapping organs and wiry guitar, but begins repeating the simple chorus over and over — working to a conclusion — well before the tune’s two-minute mark and doesn’t end for another two minutes.

The worst is “Superfan,” which is a dumb, thinly veiled rewrite of the Beatles’ “Paperback Writer,” with the rantings of an obsessive fan as its subject. Although this song was written by Cracker’s other mainstay, guitarist Johnny Hickman, the fact that Lowery would allow this on the album signals something is really wrong with his judgment.

Lowery’s lone lyrical bull’s-eye comes on the obnoxious “Guarded By Monkeys,” with him yelling repeatedly above a din of strident guitars that “You are so beautiful/ You should be guarded by monkeys.” Once again, Lowery fails come up with slightly more than a single verse.

“I’m tired of being myself/ I want to be someone else,” Lowery sings on “Miss Santa Cruz County.” His songs certainly sound like someone else’s.

©Copyright 2002 by David Hyland. All rights reserved. This material may not be published, broadcast, rewritten or redistributed.