For fans of no-frills rock music, the year 2001 began with such promise that it’s hard not to be wistful looking back.

Fighting a seemingly losing battle for precious media attention with flamboyant rappers and slick pop princesses barely in their 20s, rock once again looked posed to make a comeback thanks to a fresh crop of new bands that celebrated the music’s hippest incarnations: underground psychedelia and blues from the late ’60s and pre- and post-punk from the ’70s and ’80s.

And while the movement’s leading lights like the Strokes and the White Stripes found themselves selling out theaters, on TV and on the covers of major magazines, none of their albums exceeded a million album sales.

In fact, it’s hard not to see the whole thing as a bunch of hype that ended with a dud … that is unless you just listen to the records.

Two years later, the Strokes and another garage-rock acolyte, Black Rebel Motorcycle Club, have released new albums that pick up where they left off and aim to push the movement forward.

The Strokes “Room On Fire”

For band leader and primary songwriter Julian Casablancas, the success of the Strokes’ debut, “Is This It,” must have been sweet. 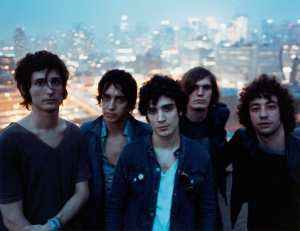 Not only did it afford him and his bandmates with the kind of trappings that eluded many of his musical touchstones — buses to tour in, large stages to play on, and movie-star girlfriends to date — but it was also an affirmation of his unique musical vision. He had discovered a “sound,” and one that was both critically cheered and to a limited extent, marketable.

While coming up with a “sound” is what should separate “artists” from the run-of-the-mill bar bands, what gives any musical artist some job security is the ability to come up with a sound with flexibility.

And that’s what makes their latest, “Room On Fire,” such a troubling record. Albeit far weaker than its predecessor, this 33-minute record neatly picks up where “Is This It” left off, adding just modest new accents to their songs (most noticeable is a Moog keyboard). The melodies are still taut (if less exhilarating), the guitars still seem permanently locked together (sometimes united, other times in opposition) and Casablancas still croons like a he’s a drunk, bored whiner (like a slumming, male version of the Hilton sisters).

The band debuted some of the new songs like “You Talk Way Too Much” and “Meet Me In The Bathroom” during their marathon tour last year, and while these songs didn’t suggest new directions were in the group’s future, they demonstrated that the Strokes still had more of the same in their pocket. On record, the tracks chug along with that familiar peppy rhythm — guitar lines intersecting and then fluttering about.

This is has its good and bad points. “I Can’t Win” and especially “Reptilia” are modest improvements on the familiar sound. The jagged songs better capture a sense of immediacy in the lyrics and strike with more welcome frenzy than cold precision. In the case of “Between Love And Hate,” which starts with nearly the same drum pattern as does “Is This It,” the song sounds cobbled together and underdeveloped.

The only songs that show hints of any musical evolution and would give the “Is This It” material a run for it, “12:51” and “The End Has No End,” feature the aforementioned Moog. But even here, the Strokes haven’t created any music beyond a limited comfort zone.

On its face, “Room On Fire” might keep the fires of their rock revolution burning, but it isn’t going to be the record that will push the band over the hump. The songs on “Is This It” couldn’t break through and this ultimately weaker effort will do no better.

A more fundamental question that this record leaves lingering might only be answered by their next studio offering: Are Casablancas and the Strokes playing it safe or are they at the end of their creative rope?

Black Rebel Motorcycle Club “Take Them On, On Your Own”

If one was to draw a parallel between the current post-punk revivalists set and rock’s last great gasp — Seattle grunge — it wouldn’t be hard to pick out who’d be reminiscent of Nirvana (the White Stripes) and Pearl Jam (the Strokes).

In that case, Black Rebel Motorcycle Club would most likely be the Screaming Trees.

Like the Trees, the San Francisco-bred outfit had a minor hit (the enticing, goth-like “Love Burns” was a fixture on MTV2 afterhours) but got more love overseas than it did stateside.

More than anything, the band’s junior-partner status likely has a great deal to do with the fact they’ve had to deflect their fair share of jibes by those complaining that the group owes a bit too much to influences like the Jesus and Mary Chain and the ’90s shoegazers.

Perhaps to answer the talking heads, the trio’s new release, “Take Them On, On Your Own,” is more the full-blown rocker than its moodier predecessor, “B.R.M.C.” This record shows a new bravery — the trio is willing to bombard eardrums with speed and volume, as well as seduce them with sexy basslines and trembling waves of guitar feedback — in order to get into listeners’ consciousness. They’ve just sped up the tempo — to mixed results.

The album’s first track, “Stop,” combines the best elements of the group’s arsenal: their penchant for burying their melodies in an elegant guitar-distortion haze and the propulsive rhythm that they offered a glimpse of with “Whatever Happened To My Rock ‘N’ Roll (Punk Song)” on the first album. The song starts with a bass that bobs and weaves like a shark until it surrenders to the guitar’s feedback groan.

The album’s other high points are series of changing musical identites. “Six Barrel Shotgun” is built around little more than screeching guitar fragment but effectively showcases the group’s mastery of their new musical attitude. “We’re All In Love” is a mid-tempo rock that might the closest the group as come yet to penning a pop song. Slow, deliberate and beautiful, “In Like The Rose” returns to the band’s familiar shoegazing roots.

By and large however, B.M.R.C.’s new approach, exemplified by tracks like “Generation” and “U.S. Government,” typically lacks the memorable hooks that can form an effective pair with the swifter pace. Scooped up by the hard-pumping beat and wading through the layers of hazy sonic distortion and enigmatic lyrics, listeners are eventually dropped off at songs’ end with little to remember how they got there. And the next time they visit this record, these are the kind of songs that we’ll reach over and click the skip button for.

Another surprising twist, the noir-ish acoustic ballad, “And I’m Aching,” is a fresh change of pace but is too derivative and simplistic. The song’s repeating guitar pattern is, well, repetitive, and love-lorn lyrics are drippy.

The record rallies late with two of their most effective rockers “Rise Or Fall” and “Heart and Soul,” but the group’s aural charms have been mostly stripped away by some of their similar but less inspiring songs.

“Take Them On, On Your Own” might be indicative of the transition the band is undergoing at the present time. Known by some and yet mostly unknown, B.R.M.C. is trying to carve out an identity for itself and yet being pulled creatively in different directions. This record makes in roads in terms of expanding the definition of their music, but not always successfully or for the greater whole.

Should the group fail to expand and yet refine their music, they might see themselves overwhelmed by the kind of creative bickering that killed the Screaming Trees.