On April 5, 2004, it will be 10 years ago that Nirvana’s Kurt Cobain took his own life. And this fall, it will be 13 years after he and his little Seattle punk band helped knock pop music on its head. 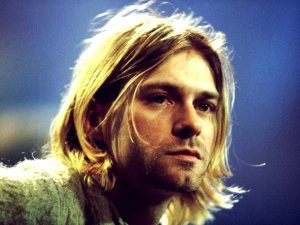 During these years, the public has come to accept Cobain as a rock legend and a musical genius. While he was alive, he was already lionized as the “new voice of his generation.” He was the slayer of goofy pop-metal. The rocker who displaced the slick R&B and hip-hop that dominated in the ’80s. His life story has become a fable and he is the hero — the indie-rock-inspired musician who fought the good fight and won.

Cobain’s face looks so natural on a T-shirt. He’s beautiful with his messy blond hair, soulful eyes and four-day-old beard. He is as iconic as any long-dead ’60s rocker that you’ll find on similar shirts in any American shopping mall.

Cobain’s music couldn’t be better appreciated. Nirvana’s major-label debut, 1991’s “Nevermind,” routinely ranks near the top of critics’ and fans’ lists of the greatest albums of all time and the group’s breakout anthem, “Smells Like Teen Spirit,” was No. 1 on VH-1’s list of the “100 Greatest Songs of the Past 25 Years.” What other contemporary group could boast such accolades?

But despite all the tributes that are likely to follow the anniversary, it’s difficult to pinpoint Cobain’s real lasting influence. Although the rock world has changed so much from the time before 1991, so much as been said — true and untrue — that muddies Cobain’s true legacy.

During the last decade, Cobain’s music has been the subject of such aggrandizement by music pundits that his real achievements seem buried by all the hyperbole and grandiose wordplay. (The most ludicrous claim was from a VH-1 documentary that claimed Nirvana was America’s first punk band. Somebody had better tell them about the Ramones.)

In fact, the foundation for the alt-rock revolution that followed Nirvana’s breakthrough had already been laid for the group. As music journalist (and onetime Nirvana chronicler) Michael Azerrad thoroughly documented in his last book, “Our Band Could Be Your Life: Scenes From The American Indie Underground 1981-1991,” a vibrant underground punk rock scene had emerged in the U.S. throughout the ’80s (the clique’s leaders included groups like Black Flag, Minor Threat, the Replacements, the Meat Puppets and dozens of others).

Meanwhile, mainstream rock bands like U2, R.E.M. and to a lesser extent, the Pixies, had opened a new front under the umbrella of college-rock, and metal-leaning acts like Jane’s Addiction, Faith No More, Living Colour and the Red Hot Chili Peppers had begun to make headway on radio and MTV.

Perhaps bored with hair-metal’s histrionics, the rock audience was primed for something new and the media had become increasingly aware of the rock underground. All that was missing was the right band with the right image and the right four-chord riff that could upturn the rock hierarchy.

This gravitational shift toward alt-rock that was set off by “Teen Spirit” can be seen as essentially a process of dialectics playing themselves out. The 19th Century philosopher Hegel (bear with me here) outlined his conception of dialectics, which states that one can arrive at a truth by stating a thesis, developing a contradictory antithesis, and combining and resolving them into a coherent synthesis.

In this instance, Cobain and Nirvana’s music was the right mix of indie chic and pop hooks. Clad in the punk rock aesthetic but armed with a level of musical accessibility (hard rock chord changes and radio-friendly production), the band succeeded in melding a new aesthetic.

Nirvana bassist Krist Novoselic would later say in another VH-1 documentary that the “mainstream came to Nirvana,” but in reality, he was being a tad disingenuous. For as much as the band had come of age in the underground scene and espoused punk virtues, by the time they released “Nevermind,” the group’s music was no longer pure. Nirvana’s songs succeeded in the marketplace because it basically gave hard rock and heavy metal a long-overdue facelift.

No question, the band kicked the door open, but it was already bursting with talent that the media had ignored for too long.

This fact shouldn’t take away from Cobain’s gifts as a songwriter. Coated in Cobain’s jagged guitar lines were lilting melodies and contained succinct, powerful lyrics. (Who can forget such exquisite tracks as “Comes As You Are” or “Heart-Shaped Box.”) It was the catchiness of Nirvana’s music that propelled the change.

Ultimately, like all revolutions, the alternative rock hubbub eventually subsided a couple of years after Cobain’s death. The Seattle bands and their contemporaries that were once the new kings of rock, had broken up or had faded burnt themselves out creatively.

But here, once again, dialectics come into play. By the late ’90s, the forces of counterrevolution were in full swing. As the record industry sought out new music to exploit, they sought out acts with completely different aesthetics.

Heavy rockers Limp Bizkit and Korn were clearly heirs to pop-metal’s crown and coveted the trappings of fame. At the same time, the hit factories that drive genres like pop, R&B and hip-hop pumped out the kind of hits to allow them to recapture their spots at the top of music’s pecking order.

While the music landscape looks remarkably similar to the pre-Nirvana era, Cobain’s influence can still be seen today. One can still hear elements of Cobain’s influence — in Korn’s lyrics of self-loathing or in Fred Durst seeking validation by getting a tattoo of Cobain on his chest. The bands’ darker public image stands in stark contrast to their glam forbearers.

Nirvana is responsible for making punk rock a marketable commodity in the music business. Without Nirvana, it’s unlikely that pop-punk outfits like Green Day, the Offspring, or No Doubt and their younger cousins in Sum 41 or Blink 182 would be so quickly snatched up by the mainstream.

It was also Nirvana that critics had in mind when they spurred on the flood of garage-rock bands (all of which have claimed Cobain as an inspiration) that now litter the current rock scene.

Oddly, none of those bands have taken off as Nirvana did. Their preeminence among rock fans has mostly avoided the mania that was the Nirvana phenomenon.

Cobain and Nirvana did change the direction of music, but the groundwork had already been prepared for the “alternative nation” to be born. The power of Cobain as an iconic figure dying young far outshines the reality.

Note: For more information about Cobain’s life and death and the rise of Nirvana, check out “Heavier Than Heaven: A Biography of Kurt Cobain,” by Charles R. Cross. The book, which had the participation of Love, Novoselic and Cobain’s family (but not Grohl), is so far the best account of Cobain’s story.