Throughout Ken Burns’ controversial PBS documentary series about jazz, his unspoken message is that the music’s worthiness and history can only be defined by retracing the trajectory of mainstream artists and that those outside those bounds are little more than footnotes, heretics creating in a musical cul-de-sac. 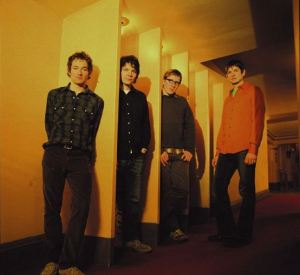 Certainly, Wilco leader Jeff Tweedy would take issue with Lees’ assessment of a musician’s role. Starting in the mid-’90s, Tweedy has piloted the band out of the long shadow of his seminal alt-country band, Uncle Tupelo, and guided their evolution from a generic country-ish bar band to a keyboard-rich power-pop group to avant-garde loving disciples of Sonic Youth. With each album, Tweedy the songwriter has grown braver in pushing the musical envelope, ruthlessly shedding styles, expectations and band members.

Wilco’s new record, “A Ghost Is Born,” follows their 2002 breakthrough, “Yankee Hotel Foxtrot,” and is Tweedy’s boldest step yet as he continues to wrestle with how he can graft pop song forms onto his experimental compositions. As expected, the cut-and paste-style songs often come across as wildly discordant, veering from exciting bursts of energy to the dullest, self-indulgent noodling. These songs demand a listener’s patience, and once given, it is not always rewarded.

Besides the music’s unpredictable mood shifts, what’s most noteworthy about the songs on “A Ghost Is Born” are the cleanliness of the production and the absence of unessential instrumentation, which had been a calling card of the group’s pre-“Yankee Hotel Foxtrot” albums and was credited to (or blamed on) Tweedy’s erstwhile partner Jay Bennett. There are snippets of quietness and a feeling of open space that permeates throughout.

With O’Rourke once again directing the action and no Bennett to contend with, this uncluttered approach gives the band’s rhythm section more room to color the material. While the piano (played alternately by O’Rourke and keyboardists Mikael Jorgensen and Leroy Bach) is the prime beneficiary of this, drummer Glenn Kotche pushes himself and his kit to add percussive textures that go beyond just keeping the beat. And after a long exile, bassist John Stirrat has stepped forward, offering more backing vocal support and more adroit, expressive basslines. (Curiously, Tweedy now seems set on re-filling the spaces in the music, having hired guitar wiz Nels Cline and another keyboard player to support the band in concert.)

The record’s fifth track, “Hummingbird,” brings all these elements together most effectively. With a plonking piano figure forming the skeleton of the song and occasional guitar chords to decorate the melody, the song relies on Tweedy’s quavering voice, which is imbued with a sense of whimsy. His lyrics are more images that hang together than words and only connect when a sorrowful viola answers Tweedy’s every line.

The record’s un-mitigating high points are “Theologians,” a radio-friendly bit of piano bop, and the guitar-led anthem “The Late Greats,” on which Tweedy champions/lampoons elitist fans’ cult favorites. Besides being the record’s most unabashedly cheery tracks, the songs are the most musically inviting and are absent any of the record’s slipshod sonic explorations.

Stuck between these two tracks is the record’s most notorious song, “Less Than You Think.” A 15-minute track that transforms from simple ballad to avant-garde piece that sounds something like an air conditioner hissing while whales moan in the background, the song is the main example cited by many critics’ warnings about the record. (The fact that Tweedy chose to sandwich this little experiment between two of the record’s most accessible tracks seems to have escaped most people’s ears. The man’s not completely without pity.)

This characteristic is what still separates a Jeff Tweedy from the Thurston Moores or Cecil Taylors. They plunge into their noodling without regard for the audience, while Tweedy is still holding back a bit. He’s still leaving melodic passages to punctuate his experiments or offers a couple of short pop songs to carry a listener through the journey. And despite the hit or miss, it’s a journey that occasionally proves worthwhile.

For some, like the Gene Lees of this world, they might never get why artists push boundaries, and it’s their loss.

“(Taylor) has every right to make the music he wants,” Lees smuggily said as he concluded his diatribe against Taylor, “and I have every right to listen to something else.”