MINNEAPOLIS — Their music is gloomy and strident but if you’re a member of noir-rock group Interpol, the last few years have been so luck-filled it could make you want to get happy. 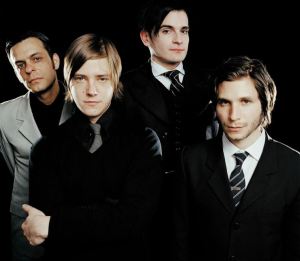 Since releasing 2002’s critics’ fave, “Turn On Your Bright Lights,” the New York-based band toured the United States and won fans far and wide beyond the indie and darksider scenes. This past summer, they were one of the preeminent noir-rock acts supporting the Cure during the Curiosa Festival tour. And with a new album, “Antics,” in stores and a recent cover appearance in Spin magazine, the band poised to push their luck again and hit the road to build further their following.

In many ways, the battle was over before the group even took the stage. Philadelphia four-piece Hail Social was first up and delivered an impressive set, even though their music is slightly derivative (of course, the same can and has been said of the evening’s headliner). Hail Social shows promise, but their music comes across as being composed by a band divided into two skill levels. On top, group’s lead singer and guitar player are responsible for the unremarkable melodies tucked safely in emo and post-punk conventions. But underneath the generic two-tone guitar lines and blaring vocals is an unusually swinging rhythm section, particularly a swift-fingered bassist. It was his sophisticated but danceable licks that compelled audience members to move with the beat, and left the group’s singer little more than an annoying distraction from the music’s true driving force.

More awe-inspiring were Texas expatriates, the Secret Machines. The trio made the most of their 45-minute set, coming out of the gate at top volume and with a merciless, eyeball-rattling beat (courtesy of drummer Benjamin Curtis) that converted most of the tightly-packed crowd into ardent fans.

As blaring as the group’s music is on their debut album, “Now Is Nowhere,” the Machines’ sound was larger still onstage. Driven by Curtis’ simple and unyielding drum attack, gargantuan riffs and layers of feedback that sounded like whale sounds, the band played every song like it was Zeppelin’s “When The Levee Breaks” (Curtis hit his kit so hard you could see him retightening his snare drum in between songs). The group sounds like a testosterone-rich version of My Bloody Valentine on a mission.

With the bar set high, Interpol had its work cut out when the four members climbed onto the smoke-filled stage (the group’s fifth member, a touring keyboardist, seemed superfluous throughout the show. He spent most of the evening starring blankly at the back of his bandmates’ heads).

But, the number of snafus the band was to endure as well as offering a subpar performance, it was too much to overcome in a 14-song, one-hour set.

Luckily, the audience was clearly on friendly terms with the band from the very start. Many might have remembered the group’s previous First Avenue show a winter or so ago when sharpened by road rigors, they performed the already earnest “Bright Lights” material with still greater intensity. But even in spite of these drawbacks, the band just seemed to be off their game.

The group split their set evenly between songs from both their albums.

The band was wildly inconsistent. Early on, they played songs like “Obstacle 1″and the band’s latest single “Evil” with perfection. However, their take on “PDA” seemed rushed and the fact that singer Paul Banks kept checking his watch didn’t inspire confidence.

Maybe the erratic nature of their performance stems from the technical problems they kept facing. For the first half of the show, the band seemed preoccupied by problems with the stage monitor. Singer Paul Banks kept looking offstage and drummer Samuel Fogarino marched across the stage several times to talk to one of the band’s techs. After those problems were resolved, Banks’ microphone was knocked out of position mid-song

In the end, Interpol’s performance was to make the more discerning fan realize luck can’t always on you side.