I’ve never seen “Forrest Gump.” The same goes for “Titanic.” I rarely watch any of NBC’s “Must See TV” lineup, and I’ve barely seen “The Sopranos” or “Sex In The City.” And so far, I’ve missed every appointment so far to tune in to “Desperate Housewives.” 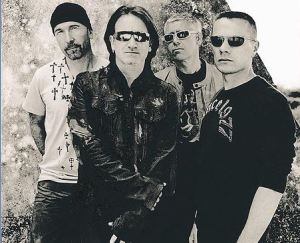 Blame it on the contrary in me — I swear I’m no elitist, PBS-loving snob — but big blockbusters of any sort make me innately suspicious. (Believe me, I’ve tried to be a good sport. I actually paid money to see both “Independence Day” and “Armageddon” in the theaters.)

What makes me so wary is the unshakeable feeling like that I’m being tricked. The big-budget, entertainment industry widgets are so carefully designed for mainstream tastes and the heavy-handed work of the publicity elves are so pervasive that I sense I’m being hustled in some way– even if I truly like what they’re selling.

It’s harder to resist if I’m being given the hard sell by a salesman as convincing and talented as U2’s Bono. He and the Edge have a 20-plus-year history of making the kind of arena-rock music that I and millions all over the world are willing to fork over dollars to own a piece of.

But, it’s exactly because of their track record and the group’s rock-gods status that so often roadblocks an honest appraisal of the band’s current wares, in this case, the newly released “How To Dismantle An Atomic Bomb.” U2 is on a pedestal, and gets the critical benefit of the doubt that others don’t. For the discerning music buyer, they have to deal with both superfan fawning as well as the disingenuous, uncritical reviews that appear in whatever magazines happen to cater to the U2 demographic. Many of the reviewers (and their bosses) are fearful of printing the unspun truth and taking on living legends and the multi-million music industry machine behind them.

Avoiding the hype altogether, “How To Dismantle An Atomic Bomb” is certainly an ominous omen for the band’s fortunes. The record is the group’s weakest effort in two decades. (Even the band’s ’90s junkers — the much-maligned “Pop” and “Zooropa” — featured a fistful of top-notch songs alongside more run-of-the-mill material.)

Reason for concern is that “Atomic Bomb” really needed to be a solid followup to the group’s last record, 2000’s “All That You Can’t Leave Behind,” which was sold as a comeback of sorts. That album had a healthy serving of filler on it, but there were a number of direct, pop-friendly singles that commanded public excitement and reinvigorated the U2 mythos.

“Atomic Bomb” has a foursome of pleasing, straight-ahead rock tracks, but taken as a whole, this record suffers from a poverty of new ideas and the group’s reliance on old-song formulas seems much more egregious than in the past.

The music sounds stifled by the band’s colossal ambitions — that each cut seems destined to reverberate in a stadium somewhere. (What other band has the cajones to write a song called “Yahweh”?)

The album’s better moments include the three most upbeat tracks. First single “Vertigo” has the kind of growl-y guitar liftoff that can melt this contrarian’s steely resolve. The group, apart from the canyon-like echo effect on Bono’s vocals, sounds like a garage band. In contrast to most of the album, contributions from drummer Larry Mullen Jr. and bassist Adam Clayton are upfront in the song’s mix and excitedly butt heads with the Edge’s playing. Even Bono singing stream-of-consciousness gibberish can’t detract from the killer hook (although the Edge’s backing vocals sometimes seem like their elbowing Bono to shut up with the non sequiturs and just sing the kicker).

Both “Crumbs From Your Table” and “All Because Of You” come to life with the Edge’s aggressive riffing, but are in retreat when the group is delivering the verses. “All Because Of You” almost rises to the sweeping heights of “Vertigo,” but seems to drift along until Bono and Edge get together for the showstopper choruses. “Crumbs From Your Table” is more complex and much better. Built on a series of ascending melodies, the song is most compelling when Bono’s vocals wade into the waves of Edge’s guitar lines.

The album’s last point of interest is “Sometimes You Can’t Make It On Your Own,” and again features great teamwork between U2’s frontman and guitarist. The Edge’s trademark galloping guitar licks are a welcome addition even though you’ve heard essentially the same part since “The Streets Have No Name.” Bono’s familiar falsetto is just as effective in ratcheting up the song’s tension. (My question: How does Bono still belt it out like he did in the ’80s mullet days when he’s always photographed sucking on a cigarette?)

The record’s other ballads “Miracle Drug” and “One Step Closer” lack such flair. The pleading “Miracle Drug” sounds way too much like a rewrite of “Sweetest Thing” from the band’s greatest hits collection. “One Step Closer” is just dull. It moves at turtle speed — ebbing and flowing based on some Maureen Tucker-style rhythmic thudding — and builds up but never satisfyingly resolves.

The peppy “City Of Blinding Lights” offers a sample of the group’s longtime dabbling in electronic rhythms. The song lacks any reveal drama or a focused meaning. It seems tired and comes across as fairly uncharismatic. The lumbering “Love And Peace Or Else” sounds stilted and its bluesy rhythm is monotonous. Even an effect that makes Edge’s final solo sound like its swimming like submarine underwater comes across more like the group’s messing with a studio trick than adopting a new sonic approach.

The acoustic-based “A Man And A Woman” is pleasing with a slight Spanish feel to the melody. Bono singing compliments it nicely except when you listen to the words. He sings in the voice of a suitor making the most uninteresting observations and pronouncements about true love. During the chorus, Bono — never a world-class lyricist — shows his lazy side by crudely rhyming “chance” and “romance.”

A disappointment of this sort would likely kill most bands. However, “How To Dismantle An Atomic Bomb” will most likely sell millions of records anyway. The group’s planned world tour — rumored to start next spring — will no doubt be one of the year’s top grossing. But ultimately, the group’s stock should drop a peg or two. Reactions from the public and critics alike should be more critical the next time around.

But this might be the best thing for the band. U2’s history, like that of a Rennaissance city, is filled with a seemingly endless cycle of success, hubris, decay, renewal and revival. After the mega-success of “The Joshua Tree,” the band released the uneven and pretentious “Rattle And Hum.” Reemerging and revitalized by “Achtung Baby,” the group was lambasted after going deeper into electronic with “Pop.” That commercial failure spawned the far stronger “All That You Can’t Leave Behind.”

As Bono once said before the band’s first bout in creative exile, “We’re going away to dream it up again.”