If Ringo Starr is to be believed, even rock stars are not immune to the human nature’s cravings for advancement and progress. 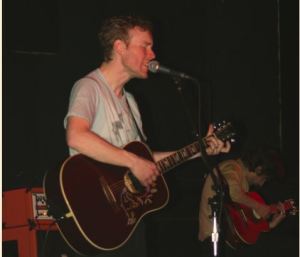 In a late ’90s documentary, Starr blames the lack of goals (or the fact that the Fab Four had seemingly achieved them all) for the Beatles’ eventual dissolution. In other words, whether it’s a guy in a corporate cubicle yearning for the corner office with a window or the rock star looking for an ever bigger platform to perform upon, we all seek new challenges.

In a recent interview, Low bassist Zak Sally essentially reiterated Starr’s wisdom when explaining the dramatic changes the long-struggling Minnesota’s trio has undertaken in the past two years — changes akin to a musical midlife crisis.

“After the last record, I think we were forced to start thinking, ‘We are getting older,'” Sally said. “‘We’re going to have to start changing the some of things we’ve been doing for 10 years. We’re just not going to be able to hit it out on the road or produce music at the clip we were at say 25.'”

While the band isn’t a household name, they have earned renown as one of the preeminent purveyors of “slowcore,” the handle most commonly used for their patience-pushing, atmospheric music. And sure, Low has had its songs featured in everything from Gap ads to TV shows. They’ve even opened for avowed-fans Radiohead on a number of European dates a couple years ago.

But a tiny cult-following and a few high-profile gigs won’t spare a band from the discomforts of crisscrossing the U.S. in a van or help them endure staying in a string of crappy motels, Sally said. They wanted more.

So, 10 years into their careers, Sally said the band members decided to reassess where they were at and asked themselves the question: What’s an indie rock trio from Duluth, Minn., to do?

In this case, the band pulled out the big guns — or at least the underground rock equivalents. The group – which includes husband-and-wife team of Alan Sparhawk (guitar, vocals) and Mimi Parker (drums, vocals) — decided a new full-court press was in order for their latest disc, “The Great Destroyer.”

The trio amped up their sound, incorporating more rock riffs into their songs, which marks a departure from the seductive, laconic music the group specialized in for their 12 previous albums. They also ditched Kranky, their longtime record label, for Sub Pop, the closest thing to a major label in the indie world without actually selling out. Finally, the band selected producer Dave Fridman, who’s overseen the studio efforts that have catapulted the Flaming Lips and Mercury Rev to critics’ darlings, to supervise the new album.

Sally said the band’s new fondness for power chords and peppier rhythms is part of an ongoing evolution rather than cool calculation.

“It is a big leap in a bunch of ways for us, but I don’t think it’s not out of the blue. It’s a leap, but it’s also a progression,” he said. “Some things that are in full view on this record are things that we’ve taken kind of sideswipes at in the past.”

Songs like “Pissing” and the record’s first single “Monkey” still embody the group’s trademark sonic moodiness, but now carry a sense of aggressiveness that wasn’t as apparent before. While their melodies often came in waves of sound before, the guitars and keyboards are now more consistently in attack mode. The music is leaning forward, as Donald Rumsfeld would say.

Sally said the band was seeking to put themselves outside their musical comfort zone.

“We knew that we had to really … reconsider a lot of the ideas of what we are and what we do,” he said. “(We had to) just do these songs justice more than any preconceived notion that anybody might have about what Low is and what Low does — first and foremost, ourselves.

Sally said label switch wasn’t brought on by unhappiness with their previous home, but rather the opportunities that a bigger label like Sub Pop could offer. The label has undergone its own evolution in recent years, shedding its reputation as the haven of Seattle’s grunge rock and nurturing some of the hottest indie acts in the country, including the Shins, Iron and Wine, the Thermals and the Postal Service.

The collaboration with Fridman was a long been mooted and became a reality when both sides’ schedules seem to line up. The band had started recording “The Great Destroyer” in Duluth, but opted to switch gears and continue recording in Fridman’s studio in upstate New York.

He added that Fridman’s suggestions and his talents as a mixer were key in bringing the material into their finished forms on the record.

“He’s a musician so all his suggestions were very musical,” he said.

Being a musician seems to be a thought that’s uppermost on the band members’ mind of late. A number of the songs on the record, like “When I Go Deaf” and “Death Of A Salesman,” are that frustration with a musician’s life and pondering giving it all up.

“I think some of those songs are like, ‘Sometimes I wonder if I’d be happy if I didn’t have this music thing knawing at me all the time,'” Sally said. “I think anybody that has any job for 10 years is going to wake up some mornings, ‘What the hell am I doing?;”

Sally said that frontman Sparhawk wrote most of the lyrics of this record, which he described as his most personal effort yet.

“We all feel insanely lucky that we get to be able to this and that people are in any way interested in what we’re doing,” he said. “At the same time, it’s a lot of hassles. There’s a lot of stupid nonsense that goes along with being a rock musician. ”

Despite this lyrical uncertainty expressed in song, Sally said that band has no intention of throwing in the towel. Instead, with this new sound and new muscle behind them, they plan to galvanize interest the old-fashioned way — hitting the road.

The band began a tour of the U.S. last month, but made a quick jaunt to England a couple of weeks ago. The trio is now ready to resume a tour of the western half of the U.S. and Canada, with Texas-based rock quartet Pedro the Lion set to continue opening most of the remaining dates.

“I think it’s a good show,” he said. “We like them. It’s always good to tour with friends you know.”

After that, the band’s horizons appear planned out only as far as reaching its next goal.