Mysteriousness is a quality few bands have mastered as thoroughly as Black Rebel Motorcycle Club. 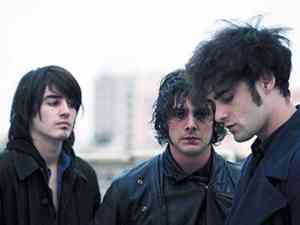 From the very beginning, the black-clad, Bay Area trio has cultivated an image that sparked curiosity. To start with, there’s the plain, black and white photos of the band members that is on their album artwork. There are no smiles and no eye contact between the bandmates. There’s a definite sense of detachment that speaks volumes about how they want others to perceive them. It naturally raises questions.

The fact is, the band always seems to be slightly out of step. Emerging at about the same time as fellow travelers like the Strokes and the White Stripes, B.R.M.C.’s music was darker, more esoteric, and more aloof than their rivals’ raucous rhythms. In the end, the Strokes and Stripes enjoyed greater popularity (although B.R.M.C. did win attention overseas).

Haters needled the group for sounding too much like the Jesus and Mary Chain (I don’t remember the brothers Reid ever sounding as alluring as some of the cuts on “B.R.M.C.”). The band responded by jacking up the volume and speeding up the tempo for its weaker followup, “Take Them On, On Your Own.”

Then, the group’s luck took a turn for the worse. They had a high-profile falling out with their record label Virgin (they’ve since signed with RCA) and for a time, parted ways with drummer Nick Jago (he later returned to the fold).

The reunited trio has bounced back from this drama by recording an album that’s a leap in the dark. “Howl” is a daring gamble that attempts to set them apart from the retro-rock pack.

Hey fellas, whatever did happen to your rock’n’roll?

This is an interesting record. “Howl” is proud homage to a well-tapped vein of American popular music. However, the trio’s conversion is so complete and the new cuts still bare some markings that they came out of the B.R.M.C. mold. This stylistic turn almost makes sense. The new instrumentation offers the band a springboard in new directions and interestingly suggests a previously hidden line of influence that connects the “slap back” echo effect that Sam Phillips used on Elvis’ early recordings and the wall of reverb employed by generations of New Wave and shoegazer bands.

(The trio’s change of tune makes a bit more sense if you know that bassist/singer Robert Levon Been — who was formerly known as Robert Turner — is the son of one of the members of the Call, an early ’80s New Wave band famously infatuated with roots-rock legends, the Band.)

The group does a fair bit of musical rehashing on “Howl,” but leaves enough of their own imprint upon it to compensate for the borrowing.

Been’s languid, seductive vocals on “Gospel Song” can keep you entranced even though the track’s spiral staircase guitar plucking is swiped from the Rolling Stones’ cover of “Love In Vain.” On “Promise” — one of the record’s premier songs — his voice works even better when partnered with a robust, churchly piano melody that folk-soul singer Bill Withers (think “Lean On Me”) would gladly snatch up.

Another song with clear gospel overtones is the latter half of the eight-minute-long, “The Line.” The cut is powered early on by a Joy Division-style bassline before the music is stripped down to just a series of Sunday morning chord changes played by a morose, wheezing organ.

The group best combines their new sound with their old ways on “Sympathetic Noise.” Based on a rhythm provided by an acoustic guitar, thudding bass drum, and some maracas, the music patiently builds for each chorus with some Mellotron accents and the shrieks from a trilling electric guitar.

“Howl” doesn’t unlock the mystery that shrouds B.R.M.C. It reinforces it. And it will keep you curiosity well teased.