The obvious but painful truth: Sheryl Crow records are the musical equivalent of painting by numbers. 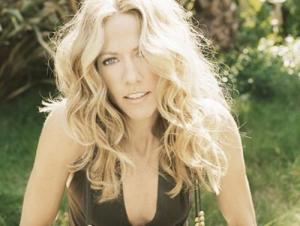 Crow’s songs are always a consistent pleaser, but for all the worst reasons. All of the classic-rock elements that she loves fit neatly together in her songs, and on some level, it can be a seductive listen, like being lulled into a good mood by Top 40 radio.

During her decade-long solo career, Crow has crafted an image as a play-it-safe, earthy rocker that oozes likeability. She glamorizes roots rock in a way that Keith Richards never could. Add a string of headline-grabbing famous boyfriends (her latest is bicycle champ Lance Armstrong) and it ties the bow on top of Crow as a record label’s gift to stockholders.

Old-school music giants like Stevie Nicks, Dylan and Clapton love her. First, she’s purty. Second, she’s an old session pro having sung backup for the likes of Don Henley and Michael Jackson. And third, she — like Lenny Kravitz — knows their old ’70s records backwards and forwards.

In the end, however, she is what she is. Criticizing Crow for not having more originality or taking a more ballsy approach to her music is kind of like taking John Mellencamp to task for dedicating his career to blue-collar rock.

And even though many of us would like to tar and feather Crow for rewriting F.M. radio staples, like how she swiped “Stuck In The Middle With You” by Stealers Wheel as the basis for her first big hit “All I Want To Do” or for writing dozens of songs that sweetly ape “Exile On Main Street,” she has a likeability that sometimes transcends thievery. She’s racked up enough radio gems like “Soak Up The Sun,” “My Favorite Mistake,” and “If It Makes You Happy” that make you want to forgive her wallowing in safe influences.

Crow’s latest record, “Wildflower,” is both a grander and more intimate record, but stays well within her safe zone. She’s backed by a pair of acoustic guitar throughout with a big orchestra playing safety net. Its job is to signal the listener that the track is peaking or to cue us when it’s time to turn into a whimpering mess.

Any stargazers hoping that Crow’s lyrics would show hints of her relationship with Armstrong will be sadly disappointed (there’s no lines about “pedaling my way to you” nor any verses that rhyme with changing a bike chain).

“Perfect Lie” is a song of defiance, each stanza concluding with Crow’s Beatles-influenced vocal crescendos and her throwing down some sort of challenge. What that challenge is remains unclear, perhaps even to Crow herself, because she’s the kind of lyricist who’ll sacrifice meaning for a word that she can rhyme with. Taken in total, the song comes across like an actor reading her lines. Which isn’t so bad per se, but with the orchestra backing her up and some raunchy guitar to spice things up, this song still suggests Judy Garland more than it does Bruce Springsteen.

While these obvious influences pop up throughout this record, the most interesting (and contemporary) touchstone is Beck. In many ways, “Wildflower” takes its structure from Beck’s “Sea Change,” an album on which Beck was creatively channeling Nick Drake from a couple of years ago.

The best example is “Chances Are,” which blindly steals from Drake’s “Pink Moon” period. Beck did the same thing on “Sea Change,” but he doesn’t have a track record as a musical copycat that Crow does. She does it again on the title track and even the McCartney-esque bombast of “Always On Your Side.”

“Lifetimes” shows a clear Beck influence too, but this is the record’s most interesting song. Instead of “Sea Change,” Crow draws from Beck’s “Odelay” era. She deploys the same electric piano that Beck used on “Where It’s At” to trail her vocals. This is the only song on which Crow seems to be whole-ly content with herself. Crow spews plenty of cliches (“We could live lifetimes in a single day”), but there’s a levity here and a funkiness that is missing in the other carefully crafted singles.

“Wildflower” is a dependable record, filled with pleasing songs. There are few surprises and few moments that there’s a strong artistic voice guiding the process. But what would you expect from someone who has devoutly cribbed from classic rock songbooks for the past 10 years?