U2, Mariah Carey To Be Among Big Winners This Year

Is it too much to ask for some honesty from an awards show? 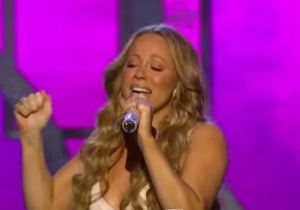 I complain every year about the Grammys not being about honest artistic appraisals or recognizing creative achievements. Voted for by members of the music industry, they’ve too often been swayed by so and so’s position on the charts or are too reverent when giants of the past bring new subpar wares to the market.

As a result, we get an awards show skewed toward entrenched talent and those that play to popular taste, forsaking cutting-edge artists. The awards become less about achievement and more about becoming a nationwide platform to advertise big-name records for sale.

Putting aside my cynicism and in the interest of full disclosure, I must admit I was way off last year. I was surprised by how well Alicia Keys and especially Ray Charles’ final record did when the votes were tallied. Buoyed by his death as well as the recent screen biopic, I underestimated how many Grammy voters would cast their lot in favor of honoring a musical giant by backing an album most serious music fans would admit was Charles carried by his A-List collaborators.

(Following this logic, had Sheryl Crow’s breakup with Lance Armstrong been announced a few weeks earlier, she’d likely sweep the handful of categories she’s nominated in.)

Although Mariah Carey, Kanye West and John Legend each grabbed eight nominations, I believe the big story this will be U2’s official canonization as the Beatles of the modern era (as if we all didn’t know it already). Although the Beatles typically came up short in the Grammy awards department, I don’t think this will stop U2 from grabbing several top awards, giving a high-energy performance and thus rekindle lukewarm record sales for the band’s lastest, “How To Dismantle An Atomic Bomb.”

Record Of The Year

The prediction: Mariah Carey. What an underwhelming group this is. Let’s pretend we’re taking an SAT test and we’ll remove Gorillaz (too underground) and Gwen (she’s really a red-carpet debutant and not a solo artist) because their entries lack the drama of their competitors. Green Day’s song was arguably the biggest radio hit of this bunch, but the Bay Area trio was nominated last year in this category for the title track to their “American Idiot” album. I don’t think Grammy voters will want to repeat themselves. Instead, we have a battle of between Mariah and Kanye, who were running neck and neck against each other in December to see which of their records sold the most in 2005. Mariah won and she’ll win here too. Her “The Emancipation Of Mimi” is a surprising turnaround given the cataclysmic disaster that was her “Glitter” album and accompanying movie. She’s this year’s Cinderella story (as much as you can be with an R&B brain trust propping you up) and the industry should recognize this miracle.

Album Of The Year

The prediction: U2. Not all of Gwen Stefani’s producers or Paul McCartney’s lovable peppiness can deny Ireland’s biggest band this award. Do they deserve it? It doesn’t matter. This will be a crowning moment in the group’s award-filled night and give viewers the rare chance to see Bono say something from the stage that is simultaneously egalitarian in spirit but thoroughly pompous. Kanye West was nominated last year for his solo debut and “Late Registration” doesn’t surpass that record. Only Mariah could pose a serious risk to the Dubliners, but her winning would be unlikely given U2’s near universal appeal.

Song Of The Year

The prediction: U2. How do you think New Jersey’s bard Bruce Springsteen would feel losing a songwriting award to Mariah Carey? Relax, it ain’t going to happen. They’ll both be losers as U2 is almost a sure bet to nab this award. Their song is a hum-able, midtempo track — Bono seems to be making up the lyrics along the way — that slowly builds to an emotional crescendo that is undeniably catchy. The group members might feign surprise when they win, but the group’s dominant position in the music world makes them the 800-pound gorilla of this category. Bono might let Larry Mullen Jr. or Adam Clayton talk during this one knowing that he can take the spotlight for “Album of The Year.”

The prediction: John Legend. An R&B star-in-the-making, Legend has had the widest commercial success of his four rivals in this group. He was nominated for seven other awards, but this appears to be his mostly assured win of the night. His name recognition will go far in pushing him forward for this award, which should go far in establishing him as a musician ripe for crossover.

The prediction: Gwen Stefani. The No Doubt singer had everyone from Dr. Dre to Andre 3000 from Outkast helping her on her hip-hop, street-flavored solo debut, which could count for something. But I think it’s Stefani’s brave fashion sense and not her musical prowess that will win her support. Fiona Apple’s album was sensational, but it’s unlikely she’d win — voters might fear she’d start hectoring the audience as she did at the MTV Video Music Awards a few years back. Sheryl Crow’s album was nominally more personal in tone, but lacked any breakout hits. Should the voters break down along gender lines, Paul McCartney obviously might come out ahead.

The prediction: U2. While it might seem obvious that U2 would win this one too, for the same reasons stated above, Coldplay’s appearance changes things a bit. Some voters might seek to balance the ticket by giving the top awards to U2 and bestowing others to lesser known yet deserving acts. In that case, Coldplay — a young band with a U2-like elan — could edge past the Irish rockers. The inclusion here of Neil Young and the Rolling Stones is a joke that’s not funny. The Foo Fighters’ album is unremarkable and the band was nominated to represent modern rock’s more aggressive side.

The prediction: Coldplay. This seems almost rigged for Coldplay’s benefit. U2 was nominated in this category last year for the single, “Vertigo.” This year, a far weaker U2 song is tossed in the pack and expected to be devoured. “Beverly Hills” was the most original cut of the five, but I think Coldplay’s epic sound will give them the necessary leverage.

The prediction: Death Cab For Cutie. An interesting competition. “Funeral” has garnered a number of fans among rock’s elite — everyone from Coldplay’s Chris Martin to David Bowie — but the band is still largely unknown to rock’s masses. This will hurt them. Death Cab, which has broken through on radio and recently appeared on “Saturday Night Live,” is the clear favorite. Franz Ferdinand got on here only because of their much-praised debut, which won a pair of nominations last year. The records by the White Stripes and Beck haven’t generated as much excitement this year, and they’ll likely be pushed to the sidelines.

The prediction: Unknown. If I had my way, Nine Inch Nails would win this Grammy. Their last record was a startling reawakening from a years-long musical coma. But, I don’t think the band has that groundswell of support that it did a few years ago. System Of A Down and Queens Of The Stone Age have their fans, but their records weren’t as exceptional as previous efforts. Audioslave is also a popular choice for some, but the band hasn’t truly gelled and their music suffers from a hard-rock same-y-ness that doesn’t fulfill their supergroup rep. And Robert Plant hasn’t rocked hard since the late ’80s and “Now And Zen,” when he tried to fit in with the hair metal bands.

The prediction: Slipknot. Traditionally, this category has the most interesting nominee names (they all seem to combine clever combinations of anger, violence, sex and Satanism). This year’s crop is fairly ho-hum and so are their songs. Slipknot was here last year, and should win. If anyone else pulls it out, I think they made a deal with the devil.

The prediction: John Legend. Alicia Keys surprisingly won some Grammys last year, but realistically shouldn’t expect to take any home Wednesday night. Stevie Wonder and Earth, Wind And Fire seem like just veteran ballast in this category. Young blood in the form of John Legend (not Fantasia of “American Idol” fame, who is too immature an artist and her record lacks a spark) should come out on top.

The prediction: Mariah Carey. The idea of honoring Destiny’s Child on their supposed career finale could prove key in deciding this award’s fate. Likewise, people’s rush to get behind a new star like John Legend. But, I think the about-face that Mariah Carey’s career has undergone — from being dismissed from a jaw-droppingly enormous record contract for releasing a bomb to selling the most albums in 2005 — is the main attention grabber. She’s achieved something that every washed-up star can look up at and dream about for themselves.

The prediction: 50 Cent. The semi-fictionalized biopic about his life didn’t catch on with audiences last fall but, 50 Cent is still hip-hop’s most dangerous rapper. That should guarantee him the win. 50’s mentor Eminem, by contrasts, seems oddly safe — even passe — in comparison to the gritty, threatening rhymes coming from 50 or the Game (nominated in “Best Rap Song” category). Meanwhile, Common’s record is too intellectual and Missy Elliott too weird for all the stuffed shirts.

The prediction: Kanye West. Although the scenario of the semi-enemies the Game and 50 Cent climbing the stage together would make good TV, this seems unlikely. Instead, I think the standout jam from Kanye’s latest should prove more than enough. There’s the possibility that the Black Eyed Peas might pull this out amid a groundswell of support, but given the choice of song, it doesn’t outdo Kanye’s.

The prediction: LCD Soundsystem. The band’s self-titled record was one of 2005’s best and I will go out on the limb to say Grammy voters might get it right this time by backing LCD Soundsystem. Not as famous as the Chemical Brothers or Fatboy Slim, not as flummox-ingly avant garde as Daft Punk, and not over the hill like Kraftwerk, I think LCD could win it. Some might seek to honor Kratwerk for basically inventing electronica in the ’70s, but that anticipates a reverence that fans of something that’s still fairly underground typically lack.

The prediction: Chemical Brothers. “Galvanize” enjoyed some crossover success on rock and alternative rock radio late last year, which should raise its chances considerably. And who can’t be won over when you hear Q-Tip’s brief guest appearance on the track? New Order sticks out here, an ill fit in this category as the band has leaned more in the rock direction since the mid-’90s.

The prediction: Faith Hill. Although Gretchen Wilson again makes an appearance in this category and Trish Yearwood proven formidable in other categories in the past, I think Faith Hill can count on taking this one home.

The prediction: Gretchen Wilson. Last year, Loretta Lynn did quite well in the country categories thanks to her collaboration with the White Stripes’ Jack White, which muscled most artists out of the spotlight. I think Wilson has had to wait an entire year to pick up an award, and this time it will be her’s.