Anyone who objectively listened to the White Stripes’ last record could hear it in the songs. 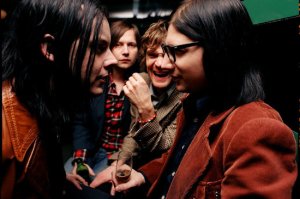 The thunderous blues-rock duo who once floored the rock world with an idiosyncratic sound, fusing old-school reverence with live-wire guitar howling, seemed creatively depleted. Instead of performing amped-up, quasi-homages to old blues masters, they were revering a weakened version of their own music.

But, if you think the Detroit group’s mastermind and garage-rock golden boy Jack White had permanently written himself into a corner, you’re wrong. White has a brand-new side band whose debut album reasserts his primacy among today’s rock auteurs.

The new group, the Raconteurs, is a more conventional band than the White Stripes. It consists of White’s new songwriting partner and co-vocalist Brendan Benson and the rhythm section from Cincinnati rock outfit, the Greenhornes. And with two more bodies in the band, what we get is a distinctively fuller (finally, a bass guitar!) and more collaborative adaptation of ’60s classic-rock influences than the boom-crash bluesy stomp of the Stripes.

The quartet coalesced a couple of years ago and was based on the members’ existing friendships. White had previously drafted the two Greenhornes to back Loretta Lynn on her Grammy-winning album, “Van Lear Rose,” which White produced. Meanwhile, Benson was an old hometown friend of White’s and their new collaboration — initially born of the record’s opening cut “Steady, As She Goes” — became the foundation for the project and its fuel.

The ultimate fruit of this partnership is “Broken Boy Soldiers,” a quickie, highly contagious 10-song album that delivers beyond most expectations for your average side project. While the band clearly lionizes groups like the Beatles, the Kinks, Led Zeppelin, and although there are clear similarities with the White Stripes — hard-rock guitar, drums, loud voices — this album establishes a separate and unique identity for. the Raconteurs.

This identity comes through on songs like “Steady, As She Goes,” which is a cohesive amalgam of elements drawn from any Baby Boomer’s record collection. A Motown-style tiptoeing bassline combines with ’70s hard guitar onslaught and some late Beatles’ organ accents. Add Benson’s nasally backing vocals and a riff-laden chorus creates some crushing guitar pop.

Helping to reinforce the songs’ pop roots, White and Benson take the vocals very seriously and treat them reverentially. Disparate songs like “Hands,” “Store Bought Bones” and “Intimate Secretary” utilize tight vocal harmonies by the two singers that although they clearly take their cues from the Beatles, never mimic them. Despite this common element, however, the songs are wildly different. While “Hands” relies considerably on its vocal melody for it identity, the vocals are secondary to the mechanized guitar riff on “Intimate Secretary” or “Store Bought Bones,” which is overflowing with an ear-splitting Hammond organ similar to the one made famous on “Gimme Some Lovin’.”

The album’s title track is a dynamic, acoustic guitar trance that might emerge from around a nighttime campfire hanging with non-Western musicians. The hurried song could easily cut it among the masterworks on “Led Zeppelin III.” The track’s relentless rhythm is paired with an electric guitar that hovers above like a cello is slowed when an acoustic guitar breaks the pace, slows the rhythm down with several chords and flourishes and reinvigorates the galvanizing force.

By contrast, Benson takes the sole front position on the record’s more staid numbers, “Together” and “Call It A Day.” Both tracks are quiet respites and emerge as high points of the record. Benson’s voice — somberly indistinct and less shrill than White’s — is ideally cast to sing in the role of the dour dreamer. For “Together,” he is a life-hardened sage to a new love, accompanied by a gentle guitar strumming and murmuring electric piano. “Call It A Day” is beautifully dark. The song has a distinct Cowboy Junkies feel based on an understated bass pattern. White takes a pass on the mic and so Benson provides his own Lennon-esque supporting vocals, singing a multi-layered, heavily affected descending melody.

Black sheep of the record is “Yellow Sun,” a summer-y, folk-blues singalong with support from a pair of acoustic guitars and some electric piano embellishments.

Another musical outsider is “Blue Veins,” which is the only track that bares the markings of being an escaped White Stripes song. Built on a reverb-heavy, Link Wray-ish guitar chords and strident piano chords, White sings like the fast-talking backwoods wailer that has made occasional appearances on all their records. During the song’s extended breakdown, which consists of stacks of vocals played in reverse, White sounds uncannily like Robert Plant does during the similar point in “Whole Lotta Love.”

With the White Stripes, White has already earned an impressive list of laurels and distinctions: rock star, blues-rock revivalist, garage-rock prodigy, offbeat songwriter and ace producer. “Broken Boy Soldiers” serves to prove wrong those cynics who doubted his creative powers while adding yet another feather to White’s headdress, er, cap: that of comeback kid.