As I’ve noted before, a band’s lineup is a sensitive creature. Besides assessing qualities like a person’s creativity and musicianship, group members have to decide whether they can live with this person on a bus, backstage and in a studio for long, tedious periods of time. 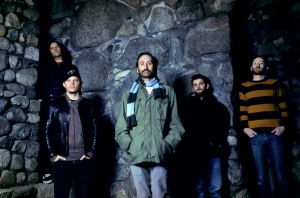 But this arrangement cuts both ways. Beyond the collective’s needs and wants, each individual musician must assess whether the unit that they subscribe to can contain and sustain their own personal ambition. Nothing is more poisonous to a group’s much-sought-after chemistry than frustration and jealousy. A fractious arrangement often keeps the coulda-beens as permanent wannabes. Those who take such relations lightly do so at their own peril.

Many observers might think guitarist Mat Brooke’s 2006 departure from indie-rock sensation, Band of Horses, was ill-timed. After helping frontman Ben Bridwell hatch the group and write and record their much-buzzed debut, Brooke dropped out just as the rewards began to trickle in. Since then, Bridwell and company have scored again with a critically lauded followup and earned a little extra cash after one of their songs was used in a new Ford commercial.

Rather than stay and play second fiddle in Band of Horses, Brooke rebuffed the big payday so he could form his own outfit, Grand Archives. The quintet’s sun-soaked debut album, “The Grand Archives,” is assigned the unenviable task of proving doubters wrong. What these songs lay out is an intriguing start that begs expansion.

For a man who helped conceive a band that pays such obvious homage to Neil Young and other bulwarks of classic rock, the fact that Grand Archives works in musical areas first blazed by the lions of ’60s and ’70s rock shouldn’t be a surprise. While Brooke’s erstwhile bandmates retained all the flannel-clad, fuzzed-out guitar muscle, he and his new group aims to dig deeper into the musical toolbox to follow a more sophisticated and complicated vision of California-style jangle pop, country-rock and singer-songwriter fare. This isn’t a beach party record, but rather the soundtrack suited for a nighttime chill-out around the campfire with the waves rolling in and out in the background.

Although “The Grand Archives” lacks the glorious, power-pop exultations on Band of Horses’ own debut, “Everything All The Time,” or the crunchy power that his former bandmates zeroed in on “Cease To Begin,” the new disc has a mysterious charm. It’s unpretentious and easy-going in tone. One can imagine beach bums like Matthew McConaughey latching on to the sense of casualness that permeates the songs. Most importantly, the record’s 11 laconic songs firmly establish a musical persona disengaged from Brooke’s past life.

That sonic identity is more complicated that it sounds. Brooke’s croon is mostly indistinct and the songs’ energy levels build at a snail’s pace. But all these aspects are a mask to hide the intricacies of the vocal and musical arrangements. Besides drawing on older, established influences, one can detect elements poached from Elliott Smith’s fey pop sensibilities, Beck’s folk-country experiments and Coldplay’s on-stage dynamics.

This is best exemplified on a track like “Swan Matches,” where Brooke’s bored-sounding, dejected singing partners with a sluggish shuffle pattern, lazy guitar strumming and a twee piano that ultimately swells into a soul-searching chorus. Other voices, including guest (and former Carissa’s Wierd bandmate) Jenn Ghetto, join Brooke’s just at the instant that he finds some remaining strength and powers through. It’s a sing-along that emerges from the most unexpected country-ish shell.

The country feel extends to “A Setting Sun,” on which Grand Archives tack gorgeous pedal steel guitar. That familiar, high-pitched whimper augments the cut’s peppy sway in the spirit of label mates the Shins. Like James Mercer and company, however, these rustic embellishments only exist as adornments on top of the basic pop-music premise. Again and again, Brooke, the group’s primary songwriter, proves adept at seizing musical components from others and incorporating it with the band’s overall reverb-washed sound.

Take the harmonica-laced “Miniature Birds,” which has a propulsive quality, suggesting equal parts Elliot Smith’s “XO” period and “Schoolhouse Rock.” Group whistling, snappy drumming, likeable harmonies and Burt Bacharach-like horn arrangements create the ideal picture of pop songwriting. Coming from the opposite direction, “George Kaminski” has the stark, acoustic guitar licks and unusual vocal interplay that clearly recall the Decemberists, fellow indie-rock darlings from the Pacific Northwest. Brooke and his bandmates never cross the line into all-out plagiarism, demonstrating instead that their diverse musical interests extend into drafting complex arrangements and not rocking out.

To be sure, the album’s best moments come when they just take their time. “Index Moon” erupts with ringing guitars and big drum beat like Coldplay’s “In My Place” and would be equally appropriate bouncing against the insides of a stadium. Its sameness fades as an elegant chorus surges and then Brooke and guitar players Thomas Wright and Ron Lewis joust at the song’s melody with sizzling guitar breaks.

There’s no mistaking that “Sleepdriving” is the pinnacle of “The Grand Archives.” The track was championed on Pitchfork before the album’s release and fulfills the hype. The song is a beautifully bloated production, a fusion of vocal harmonies, piano, acoustic guitar and a drumbeat that sounds like a whip crack. The size hints to listeners that something emotionally powerful is coming, and this sense of foreboding haunts the slowly strutting melody, which builds and builds before ducking out as another verse comes up. Just when you’d expect the band to finally to let loose the flood gates, a meditative string section emerges for the cut’s bridge. It’s all a tease and a good one at that. As the song segues into an exquisite coda, voices collapse and crisscross over each other and we can hear the full extent of Brooke’s skills as an arranger.

If “The Grand Archives” doesn’t displace the affections that fans have for the Band of Horses’ two discs, it’s likely expecting a little too much of Brooke and his new bandmates. After all, the Band of Horses had several years and two songwriters to develop material. Instead, this debut should be viewed favorable because of the beginning it represents. It establishes that Grand Archives is more than just a vanity project. It’s proof that Brooke has the creative strength to strike out on his own and back up his ambition.