If you’re one of the three members of R.E.M., you might at this point really feel like you’re watching the end of the world as you know (but most likely, not feeling fine.) 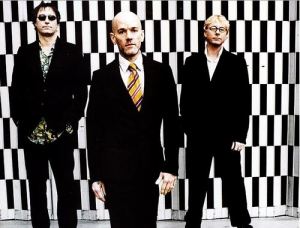 Life as Michael Stipe, Mike Mills and Peter Buck in 2008 ain’t what it used to be. The last 10 years have been a particularly rough patch for the band, one that has seen the one-time alternative-rock titans slip ever closer to irrelevancy. It’s has been a time filled with the loss of a founding member, sagging album sales, stilted songwriting, fading indie credibility and worst of all, deafening silence from rock fans. Once likened in status to the Rolling Stones and mentioned in the same breath as U2, the group has quietly slipped from fickle pop music fans’ memory and drifted ever closer to becoming little more than a high-paid nostalgia act.

So precipitous is R.E.M.’s creative and commercial fall that we can now see evidence that the band members are frantic to reverse it, perhaps kicking themselves for writing a partial homage to ’70s comedian Andy Kaufman instead of John Travolta. A Travolta-like career resurrection is clearly on the band’s mind these days as they launched a full-on publicity campaign to promote their latest album, “Accelerate.” Unfortunately, this album is more evidence that ever that a downturn is continuing and for the most part, their tarnished status is entirely appropriate.

It’s hype — not great songs — that’s driving the media buzz about “Accelerate” and it represents an organized campaign by R.E.M. and its pawns to return the band back onto pop music’s A list. Perhaps overcome with fond memories from their dorm days, aging Generation X writers are conveniently doing the group’s dirty work, touting the record as “R.E.M.’s comeback.” To convert all those Fall Out Boy fans, the band has created a series of album-related Web sites to boost their profile on the Web.

Lastly, the group has begun hitting non-music-oriented television outlets hard, including the “Today” show and “CBS Sunday Morning,” and even succeeding in wow-ing a usually unassailable Stephen Colbert to act a little fawning on “The Colbert Report.” Can an appearance on “Live with Regis And Kelly” be far off?

Shilling notwithstanding, many people have pegged R.E.M.’s creative decline to the moment drummer Bill Berry departed in 1997. During the tour for the group’s last truly noteworthy album, the grunge-era-influenced “Monster,” Berry suffered a brain aneurysm in the middle of a concert performance. He completed the followup disc to “Monster,” “New Adventures In Hi Fi,” but quit the group shortly thereafter.

And while his exit certainly was a blow, it has been the much-publicized, on-going, intra-band discord among the remaining trio that has sapped the musicians’ creative process and not Berry’s absence. There’s punchy choruses, careful arrangements and solid musicianship in their post-’97 material, but very little of the zest and dynamism that R.E.M. once so easily displayed.

For an example of their former powers, R.E.M.’s mega-selling hat trick, “Green,” “Out Of Time,” and “Automatic For The People,” were albums with a unique but singular vision. “Green” fused the group’s underground influences with forthright pop hooks. “Out Of Time” mastered the art of crafting killer pop structures while expanding the group’s sound to focus on acoustic/folk/country undercurrents. The underrated “Automatic” was a darker, more reflective record, but one that saw the group’s sonic sophistication reach its zenith but without becoming lost in its brainy-er moments. At their core, each of these LPs boasted songs with great melodies to accompany whatever the musical explorations the band sought out.

Each subsequent R.E.M. disc has had fewer and fewer instances where the band’s pop élan and experimental tendencies appear to align together. “Accelerate” is really no different. This is record whose songs beg to be appreciated, but will ultimately never rank against either the group’s back catalog or what’s sitting in the next rack at the CD store. Only a fondness for R.E.M.’s seminal period should motivate anyone to get “Accelerate” and satiating that impulse will be the only real return.

“Accelerate” doesn’t work because of a lack of effort. The band knew that a change in direction was necessary before recording commenced and sought out producer Jacknife Lee, famed for his work with U2, Snow Patrol and Bloc Party, to guide them along. (Apparently U2’s the Edge recommended Lee.) On paper, Lee appears an inspired choice. His recorded output is a tribute to the middle ground between abrasive sounds smoothed down to fit populist tastes. He’s proven to have the uncommon ability to transform gritty rock songs into ear candy nuggets. In this instance, however, R.E.M. has provided him only uninspiring raw material to work with.

The songs’ aggressive guitarwork is the clearest delineation between “Accelerate” and the last couple of R.E.M. albums. Buck’s guitar has a bite that the group hasn’t harnessed to this extent since “Monster.” Tempos are sped up and rocking out appears the order of the day.

Opening cuts like “Living Well Is the Best Revenge” and “Man-Sized Wreath” set the tone, but also embodies what’s wrong here. Dreaming up a few riffs and chord progressions doesn’t compensate for not having strong melodies and R.E.M is attempting such a sleight of hand. These songs present themselves as a bit too canned. “Living Well Is The Best Revenge” has a peppy rhythm whose awkwardness literally comes across like the trio is consciously thinking, “This is how R.E.M. does a rock song.” Making it all even more disconcerting is how Stipe’s voice sounds so ragged and dried out. Does he need a drink?

“Man-Sized Wreath” has an R.E.M.-style lush chorus (boosted by Mills’ church choir background vocals), but what’s wrong is that the track’s verses lack the chorus’ power. It’s just an unfleshed-out mesh of powerhouse strumming and Stipe’s spewing clumsy lyrics with the same vocal charisma as he once peddled their best material.

Not all the songs are so disappointing. “Supernatural Superserious” is pleasing enough as an attempt to reimagine easy listening music for a generation unconsciously settling into middle age. “Houston,” however, is more immediately intriguing. The song has a darker, more mysterious tone thanks in part to Buck dropping the electric guitar for an acoustic one. As he and sideman Scott McCaughey play complimentary patterns, Mills slams a two-chord organ blast that blows away the plucking and strumming like a work whistle. (The song even features some flourishes from Buck’s mandolin, an instrument that has become unjustly maligned in R.E.M. circles for those seeking a return to the group’s New Wave ’80s.)

The song is ultimately more of a promising experiment than a fully developed piece. It sadly lines up with a majority of record’s numbers parade around as chart-topping singles, but sound forced.

For those searching for unblemished glimmers of hope, fragments of old R.E.M. are evident on the record’s B side. Cuts “Until The Day Is Done” and “Mr. Richards” are easily the album’s best tracks, but mainly because they’re unflinching throwbacks to a decade or so ago. “Until The Day Is Done” sounds like a noir-ish outtake from “Automatic For The People.” Stipe croons with deadpan splendor while subdued, layered melodies of acoustic and electric guitars and piano weave against each other.

It’s immediately followed by “Mr. Richards,” whose snarling distorted guitar waves mark it as a poppy relic from the “Monster” days. Buck, Mills and new drummer Bill Rieflin (ex-Ministry sideman) operate like a complex unit — Buck creates a fog of guitar fuzz while Mills supplies an energetic bassline to give Stipe a little form to work off of. Curiously, each chorus resolves with a cascade of notes that clearly recalls Beck’s “Sea Change” period. Hey R.E.M., we know you’re cribbing for yourself guys but why swipe from Beck too?

With this kind of musical bankruptcy in mind, the song that carries the most meaning is “Hollow Man.” The track seems to be a coded message from the band to the fans who’ve tried to stand by them through their peaks and valleys. While the music is mostly forgettable, the lyrics can be viewed as an explicit confession of the trio’s duplicity as they’ve allowed their past successes to spin subsequent dull albums in a better light. Stipe belts out lines like “I took the prize last night for complicated mess/For saying things I didn’t mean and don’t believe” and “I’m overwhelmned, I’m on repeat/I’m emptied out, I’m incomplete,” and we finally get some tangible emotions from a lyricist notorious for keeping his words enigmatic.

Even if the hype works and “Accelerate” succeeds in being a big seller, a publicity campaign can’t cover up the facts forever. “Accelerate” is the latest evidence that the band’s musical growth is still stunted. Bereft of new ideas, the group has chosen to emphasize the form over substance and it makes for a listen that’s ultimately unappealing.

The best advice for R.E.M. isn’t too pack it in, but to alter their priorities. They shouldn’t care so much about making a huge single and being the biggest band in the world again. Their best records came when, nearly overwhelmed by adulation and at the height of their prestige and power, they struck out for art’s sake. They did so brilliantly over the course of several records. The post-Cold War world in which R.E.M. was such a seminal influence has ended. The group needs to realize repeating themselves won’t bring it all back.