TAMPA BAY, Fla. — As Bruce Springsteen might tell you, it isn’t easy to be the Boss, especially these days. 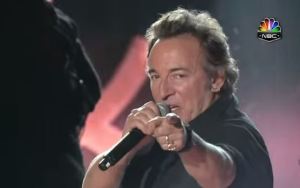 Saddled with his status as a pop-music mega-star, guardian of one of rock’s most storied back catalogs and nightly ringmaster to an ever-expanding and aging E Street Band, Springsteen is constantly charged with the undesirable task of fulfilling everyone’s expectations all the time. Like any head honcho, people expect him to have the answers.

However, when game time came for him during the halftime show of Super Bowl XLIII at Raymond James Stadium on Sunday, Springsteen quickly and easily made it clear why he’s in charge. He and his nine-member band (augmented by horn players from drummer Max Weinberg’s group featured on “Late Night With Conan O’Brien”) were on a mission to deliver a message and they sold it as compellingly as any million-dollar commercial. Springsteen’s message: Old-school rock ‘n’ roll is still alive and the E Street Band is at its beating heart. As Springsteen’s crony guitar player and ex-TV Mafioso “Little” Steven Van Zandt called out near the end of their 12-minute, four-song set: “It’s Boss time!”

The dynamic performance began with a silhouette version of that famous image from the “Born To Run” album cover — Springsteen and sax player Clarence Clemons standing with their backs to each other, ready to join forces to win converts in this and any crowd. As the lights went up, a piano melody began and he left Clemons. Springsteen took off his unused guitar and tossed to a butterfingered roadie and grabbed the mic like he was about to order the frenzied onlookers at his feet to get back to work as break time is over. In fact, for Springsteen, the party had just begun.

Staring at the camera, Springsteen transformed into a rock ‘n’ roll revival preacher, dressed in Johnny Cash black. As the band revved up to the groove of “Tenth Avenue Freeze-Out,” he commanded the millions watching this weathered rocker at home to “step back from the guacamole dip, put the chicken fingers down and turn your television all the way up!”

Prowling the stage, he let the intensity build to exhilarating effect. “Is anybody alive out there?” he howled as he leapt onto keyboardist Roy Bittan’s white piano. Only after the audience roared back twice to his question did Springsteen signal the group to kick into the song, which he greeted with an impressively nimble, white guy’s attempt at a James Brown knee dive.

While the 59-year-old Springsteen is a bonafide legend, his halftime show appearance might not be the easiest sell to non-fans. Sure, he’s had his brushes with the pop charts at various points in his career, but he’s still an acquired taste for many. For all its visceral qualities, his music is still a bit too brainy for most easy-going music fans and past halftime performers had clear advantages he doesn’t: Tom Petty has a cache of easily accessible radio hits; Prince is a superior overall musician; and U2 can more easily nab the younger demographic. But none of them are a better showman than Springsteen and he used every one of his well-honed stage tricks to maximize his limited camera time.

Leading off with “Tenth Avenue Freeze-Out” is certainly a great way to start. The song, still one of Springsteen’s best 36 years after it was recorded, is as gracefully powerful as a linebacker ducking and diving and pirouetting across the field.

Amid the musicians’ instrumental flexing and contracting to the funky R&B rhythm, Springsteen was the giddy frontman, almost chuckling and clearly pleased with how fresh he’s made this very familiar stage routine. He slapped hands among the sea of limbs, heads and shoulders as he sang the tale of how the E Street Band formed on the Jersey Shore in the early ’70s. He gave a loose, casual reading to the lyrics even though the group precisely punctuated his every verbal flourish.

As he referred to Clemons in the second verse, he sauntered over to the man himself, who was strangely working his sax magic dressed in a sorcerer’s gown. The spectators went bananas. Clemons answered back with a guttural wail from his saxophone, sending his frontman and his fellow musicians spinning to another chorus.

If there was anything to criticize with this song, it was that Springsteen cut out a verse or two and allowed the audience and his bandmates to sing the choruses and cover the vocal high parts for him. These are but minor infractions. In fact, the only real mistake of the performance was the most hilarious. The impulsively excitable Springsteen dove to the ground and slid across the width of the stage on his knees, whacking an unsuspecting camera with his crotch in the process. Ouch! Hope Bruce was wearing a cup.

Taking a more serious turn from “Tenth Avenue”, Springsteen and the group kicked into a modified “Born To Run.” While the song is completely defined by the singer’s verbose passion, this wasn’t the time and place for that version. This cut was also abridged and Clemons’ famous sax solo came a little too early, failing to be the explosive release valve that it typically provides on record or live.

You ultimately can’t fault Springsteen. He was trying to cram a six- or seven-minute masterwork into three or four. He howled in the faces of the throngs in front of him and swung his guitar-picking arm like a windmill, Pete Townshed-style. Like the would-be seducer in the verse, Springsteen certainly made every note burn with infectious energy, making the most of the time he had.

As “Born To Run” burned out like the fireworks shooting overhead, a gospel choir of more than two dozen rushed from the wings to join Springsteen, Van Zandt and backing singer Patti Scialfa (AKA Mrs. Springsteen) on the lip of the stage for a new song, “Working On A Dream.” Tucked in the middle of these monster hits from decades ago, it’s impossible for this ditty not to be completely overshadowed. The unfamiliar melody got a boost from the avalanche of voices, but this might have been the only time the audience could have been tempted to disobey the Boss and reach for a chip.

To win people back, Springsteen turned to his most proudly sentimental single from the ’80s, “Glory Days.” The band tackled the song like they were tracking it for the “Born In The U.S.A.” album all over again. As the musicians bounced back and forth to the cheerful up-and-down melody, Springsteen invited Van Zandt over to share his mic. The duo gloriously combined vocals and traded guitar licks and generally hammed it up for all who were watching.

As the two joked and basically sought for a way to bring the song home, a fake referee came into view and signaled Springsteen for a “delay of game” penalty. If those on the field had a vote, they surely would have demanded the teams remain in the locker room for another hour. Springsteen brought the show to a flashy climax by repeatedly swinging his guitar around his head while fireworks streaked across the sky.

Once they’d finished, Springsteen and his cohorts gathered together at the front of the stage to take in the cheers. He was sweating and beaming, his face said it all. It was part relief, part exhilaration and part quiet confidence that he’d run the gauntlet before millions of onlookers and came out better than anyone expected. He was elated that he’d proven the E Street Band still commanded the power to redeem through rock ‘n’ roll. “I’m going to Disneyland,” he yelled, and it was a comment fitting a champion who bested a formidable opponent.

After a set like that, it would seem impossible for Springsteen’s record sales not to go through the roof (and illegal downloads to follow suit). The only way this couldn’t happen is if the chicken fingers proved too tempting and all the couch potatoes in America missed the show. Anyone who dares to disrespect the Boss’ stellar performance should be fired.