Despite the prevailing headbanger stereotype, there are some metalheads who demonstrate a degree of intellectualism that belies the perception that most of the heavy metal nation is peopled with just leather-clad, brutish burnouts. 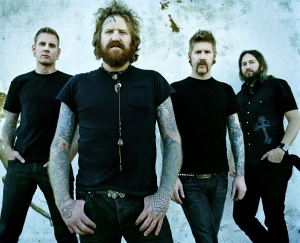 Sure, the Black Sabbath guys and others have achieved legend for their years of dull-witted depravity, but metal history is also marked with thrash pioneers and black metal mavericks whose songs have shown a surprisingly degree of smarts and sophistication.

Typically, these heady hellions have expressed their underappreciated brain power by incorporating their slightly goofy predilections for arcane knowledge and historical memory into the mauling music’s concussive riffing. Think of progressive-metal act Dream Theater’s complicated, epic song structures or Led Zeppelin’s references to pagan and Tolkien lore or the classical music allusions that axe master Yngwie Malmsteen tries to work into his fretboard firestorms. Maybe all that long hair is meant to hide some eggheads.

Add Georgia four-piece Mastodon to metal’s honor roll. Widely regarded in the metal underground since their formation in the late ’90s, the Atlanta-based outfit broke through in 2006 with their elaborate, exhaustively heavy triumph, “Blood Mountain.” Seeking to prove that this constant onslaught of decibels hasn’t yet killed all their brain cells, the band has tracked a new record, “Crack The Skye,” that distills their overwhelmingly intricate musical world to a digestible experience — at least as digestible as a record that boasts two monster-piece songs that jet past the 10-minute mark can be. Unbelievably, this record largely achieves the group’s goal without surrendering too much to commercial song forms. It brings a whole new meaning to the term headbanging.

At the heart of Mastodom’s appeal is the group’s clever, heavy fusion of ’90s metal revivalism with ’70s prog-rock. The subtle influence of groups like Yes, Jethro Tull or Rush on the band instills an intricacy and melodicism to the songs that makes them refined than your average skull-crushing anthem. It also lends a sense of unexpectedness that will keep an audience’s attention beyond just constant, blunt-force riffing. Mastodon wants real engagement with its listeners, not just to pound on them with slashing guitar and rumbling, hardcore drums for 50 minutes.

Beyond the group’s accessible musical formula, listeners should also recognize Mastodon made two key strategic decisions before recording “Crack The Skye,” both which highlight the degree of plotting that surrounds their music. First, befitting their budding status in the metal world, the group enlisted a big-time producer for “Crack The Skye.” So, they turned to fellow Georgia boy Brendan O’Brien, who has remained one of the most in-demand producers for A-list rock stars since the early ’90s. His discography includes production credits for everyone from Pearl Jam and Rage Against the Machine to Bob Dylan and AC/DC. Most recently, O’Brien has forged a creative partnership with Bruce Springsteen.

With Mastodon, O’Brien’s challenge was to help mold these frenetic, sometimes overwrought tracks into music that wouldn’t unduly pulverize listeners. Telling a big-name artist “no” is something O’Brien surely has learned by now and we can hear his handiwork in greater emphasis on melody in many of “Crack The Skye” tracks.

Besides O’Brien’s participation, the other genius move of the band’s part is how they’ve used the vague, sometimes contradictory answers they’ve given to journalists and fans about what “Crack The Skye” record is really all about. Most believe the disc, like its predecessors, is a concept album. What that concept is remains mostly unconfirmed, allowing rampant speculation and in the end, making the album far richer experience than its creators likely intended it to be. Some believe, based on what the musicians have said in interviews, that the album deals with astral projection and space travel. Others think it delvers into a concept of the elements from the Classical world (air, water, earth, fire etc.)

Still, others have suggested the record’s major moshpit-worthy suites — “The Czar” and “The Last Baron” — point toward the album dealing with Russian history, or maybe the infamous mystic Rasputin. Whatever it all means, “Crack The Skye” has enough stylistic twists and turns and obscure lyrics delivered with a bellow that multiple interpretations can coexist. Let the hours of stoned debating begin!

While “Blood Mountain” often seemed to pay little heed to anything beyond aggressively delivering furious messages, “Crack The Skye” by contrast is more conscious of manner and deliberate in action. The group, led by co-frontmen bassist Troy Sanders and guitarist Brent Hinds, attempt to draw listeners into this record more slowly, gaining strength with each downbeat, instead of plowing ahead. Opening track “Oblivion” has a lengthy intro that shifts into a Metallica-like, thrash guitar uproar, but one accented with manly vocal harmonies. There’s a conscious easing of the heavy rock throttle that makes this record an easier listen and shows these guys are more confident in their ability to manipulate those on the other end of the ear phones.

The album’s title track opens with twin guitars playing a heavy, but pretty fingerpicking pattern, traced by an acoustic guitar, which suggests we’re about to descend into power ballad territory. Mastodon, however, will have none of it. Instead, the guitars segue into a circular pattern that builds and builds as Sands and Hinds trade vocals — one growling each verse like the razor-throated Phil Anselmo of Panetra while the other croons the chorus like a siren calling out at the sea’s edge. At this point, the cut is merely OK. The addition of computer-affected voice knocks this song is a new direction as the guitars begin to break loose from shadowing each other. This too ends, but not before Mastodon proves they can take listeners high and low in the same song.

Although a banjo ditty opens “Divinations,” it and the succeeding track, “Quintessence,” again devote a substantial amount of time to introducing moods before getting to the frantic parts of the song that will get their fans sweaty at shows. “Divinations” revs up like a hard-rock twister gaining strength with each pass the aggro guitars make. They eventually deploy all their might into a Slayer-ish gallop. Meanwhile, Mastodon’s method of attack is like a rampaging horde that is consistently shifting ground and tactics. The guitar fistfight eases into a blinding solo that quotes from King’s X axeman Ty Tabor before recycling licks and motifs heard earlier on. “Quintessence” more explicitly quotes from the band’s prog forefathers and tries admirably to make those arty inclinations coexist with punkish tempos. An undulating keyboard breezes through the melody now and again and provides a sublime distraction as the musicians reorganize before launching into the next barrage of notes.

These songs are intense, but they’re really only an entre for “The Czar,” an 11-minute, multi-part symphony that seduces, seizes and strangles listeners with a kind of all-encompassing world view. Divided into fragments, the song’s first part is cryptically called the “Usurper” and eases everyone into this nightmarish bedtime story. The second movement, called the “Escape,” has the album’s best succession of devouring riffs and sonic asides that recall the Queens of the Stone Age firing on all cylinders. The third segment, “Martyr,” is the bridge that offers a temporary hard-rock breather and drifts into the conclusion, “Spiral,” that climaxes with fleet-fingered solo augmented with Van Halen-style fingertaps. What this song has do with any Russian monarch isn’t really clear, but at the end of the 11 minutes, your brain is likely so bruised that you don’t care.

Quicker point but equally pointed as “The Czar” is “Ghost Of Karelia.” The cut is more mellow and contemplative than what you’d hear on your average Motorhead record and retains the right chest-beating attitude. Growling like Prong’s Tommy Victor and aping much of the former band’s sensibilities, Sanders and Hinds are most attuned to create a heavy-ish mood piece instead of state-quaking rocker. The same holds true for the album’s closer, “The Last Baron,” but this song’s latter half is designed as a guitar thrill ride. Mastodon waits for the end to pull out its heaviest tricks for those waiting to just act out.

That kind of a descriptor is a mischaracterization of what Mastodon’s metal mission is. They’re guiding principle on “Crack The Skye” is to orchestra the music and thus, keep their listeners in the palm of their hand. This turns on its head the prevailing concept that a Dave Mustaine or James Hetfield use when they get a cache of killer guitar licks. In most cases, they just want to vent and blow the audience members’ hair back.

The members of Mastodon are more strategic in their use of the metal. They might have the guitar chops to knock everyone over, but they understand reaching out to their public means giving them a space in the music, changing pace and giving them time to reflect and appreciate. Their music doesn’t always move forward, sidestepping into interludes and digressions, before it eventually inundates the senses. It makes for a more interesting listen.

It’s the smart move. Not bad for a bunch of boozy, tattooed meatheads, right?