About 15 years ago, grunge heroes Alice In Chains were one of the world’s biggest rock bands, conquering the pop charts with soon-to-be heavy metal classics and earning notice as a stadium act-in-training. It wasn’t long after that when these aspirations were dashed and the band’s circumstances began to live up to the group’s name. Only months after its commercial peak, Alice In Chains was restrained, burdened down and locked away. 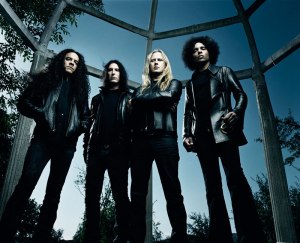 The ’90s were quite a ride for the group. Although they were only at the top for a handful of years, the group forged an influential legacy: Recording monster albums, headlining Lollapalooza, opening for a reunited Kiss, even taping an “Unplugged” performance. More then the highlights though, Alice In Chains’ heavy, glowering music unlocked the imagination of subsequent generations of headbangers. But it didn’t last. The group’s career quickly became mired in a frustrating standstill as their output slowed and eventually ceased all together. The band was hampered as the debilitating effects of drug abuse ravaged the group’s doomed singer Layne Staley. His reclusiveness kept Alice In Chains off the road, estranged from the studio and eventually, out of most rock fans’ purview.

Staley’s heroin-related death in 2002 seemed the final resolution for the band, limiting any chance for Alice In Chains’ return. His death placed the band under glass as a relic of rock ‘n’ roll’s. They were simply just the latest, tragic exemplar of what could have been. Now, Alice’s surviving members now would prefer the band’s name serve as a different kind of example: one of music’s rare successful resurrections. Freed of the chains, the band wants to pick up exactly where it left off years ago. They’re embracing their legend and tentatively expanding on it with a new singer and new album, “Black Gives Way To Blue.” The disc is a surprisingly seamless continuation of the Alice sound without straying into tacky tribute band territory. And despite the record’s obvious deficits, it’s still suggestive of the group’s continuing air-guitar allure.

The band’s renown in metal circles was earned the hard way, literally. Of the Seattle super-bands of the alternative-rock era, Alice In Chains was something of an outsider on the scene, chiefly because they were quiet defenders of heavy metal traditionalism. While Nirvana had firm roots in the post-punk underground and Soundgarden and Pearl Jam set their songs to hover somewhere in between their metal and punk impulses, Alice In Chains was the true missing link between metal’s old and new. The foursome was the bridge in the continuum linking the spandex, hair spray and flashy solos of the ’80s to the menacing riffs, booming vocal hooks and beard and tats look of the ’90s and ’00s.

Alice’s metal leanings — guitarist Jerry Cantrell’s squealing, Van Halen-influenced solos and the cred earned from pre-grunge package tours with Anthrax, Megadeth and Slayer — won the band rank-and-file support in the metal community as well as some high-placed friends, most notably Metallica. In the ensuing years, even after Staley’s addictions brought Alice In Chains to a halt, the members of metal’s biggest act championed Alice countless times and stoked their reputation. This, along with the enduring appeal of Alice’s discography, led subsequent waves of younger metal bands to take stylistic cues from Alice In Chains, with obvious debts owed by Godsmack, Creed and most other acolytes of the Ozzfest Nation. All metalheads must now play homage — consciously or not — to what Alice achieved in just five releases.

Given that standing, it’s still a bold move for the remaining members of Alice In Chains to tamper with the legacy. This is especially dicey given the fact that Staley’s bellowing moan was a linchpin of its music, along with his distinctive harmonizing with Cantrell and the rumbling, grunge-defining “Dropped D”-tuned guitar riffs. And after all, the ranks of bands who’ve successfully weathered a frontman change — AC/DC, Van Halen, Genesis — shouldn’t really inspire confidence.

Despite the odds, the primary motivation for the reunion is most likely Cantrell’s formidable songwriting talents rather than glory and riches. Cantrell was the band’s main songwriter and carried a surprisingly heavy load of the group’s vocal work even when Staley was in his prime. As the architect of the band’s trademark sound, it’s only natural that he would want to continue in that vein, especially given how the original band stalled and then sputtered out.

Bringing new voice to Cantrell’s songs is vocalist William DuVall. During the time that his new bandmates were in their ascendency, DuVall had more of a hard-scramble existence in the industry. He was a journeyman singer and songwriter since the 1980s, crisscrossing genres in search of that THE big break that never came. He cut his teeth in a Atlanta-based hardcore band, fronted an interracial rock trio akin to Living Colour and then co-wrote former Arrested Development singer Dionne Farris’s buoyant, mid-’90s minor hit, “I Know.” For the last several years, DuVall lead a heavy rock band Comes with the Fall in Los Angeles before he began palling around with Cantrell. A tribute show for Asian tsunami victims in 2005 brought the surviving members of Alice back together, but it was another tribute concert appearance a year later for ’70s rockers (and fellow Seattleites) Heart that featured the reborn band with DuVall. Shortly thereafter, a full-scale reunion tour was arranged and kept the new Alice In Chains on the road off and on for two years.

The group confronts the doubts about the new lineup head-on with the record’s opening track, “All Secrets Known.” The song is a lugubrious mood piece with hints of Eastern influence that should still transport listeners back. “Hope/A new beginning,” Cantrell moans like his old pal. “There’s no going back to this place.” Evidentially, there is as Cantrell positions the tune squarely in the band’s comfort zone and arranges DuVall’s contributions to invoke Staley braying in the music’s shadows. It’s an intriguing attempt, but what’s missing isn’t Staley, rather it’s a really great hook.

Far better is “A Looking In View,” a seven-minute, blitzing amalgam of all that made Alice so remarkable in the flannel years. Cantrell and DuVall partner on ghoulish harmonies, trudging riffs and a top-flight chorus. The song forcefully establishes that Alice hasn’t missed a beat despite being AWOL. The main weakness of the song, however, is the blatant sense that Cantrell couldn’t edit himself to make this a single. There are too many riffs, too many interludes and not enough of a sense that group is pulling toward the same exquisitely hellish place. Instead, listeners come away with a sense like they’re just passing through a string of nightmare vignettes.

Such is Cantrell’s presence as vocalist and guitar player that it’s three songs into the disc before we’re really introduced to DuVall. After two years of touring in Staley’s sted, DuVall knows the terrain that in which he’s operating and appropriately seduces and then spars around the thrashing rhythm of “Last Of My Kind.” His voice is more pointed and sinister than Staley’s horror-movie groan and sadly, less unique. As such, his voice doesn’t quite fill in for Staley, but rather occupies a new place as Cantrell’s lieutenant.

The overarching drawback with “Black Gives Way To Blue” is the lack of great songwriting. The group’s last, self-titled record was a mixed effort whose faults at the time could have been brushed off as attributable to Staley’s decline, but no longer. With two solo albums and now “Black Gives Way To Blue” as exhibits, it’s apparent that Cantrell can’t always lay out a string of tracks at the same level as “Dirt” or “Facelift.” Recalling those old albums is one thing, but many of the new songs come across as too formulaic. “Private Hell” and “Acid Bubble” are less dramatic rehashes of the gloomy masterworks off “Dirt.” The buzzing bee guitar sting of “Check My Brain” is exciting, but soon the song, along with “Take Her Out,” both quickly reveal themselves as yielding only dummy lyrics and cheap pop choruses.

Even more disappointing for “Black Gives Way To Blue” is the forgettable acoustic material inserted in the record’s core. Previously, Cantrell and the band’s acoustic numbers were yet another facet that made Alice In Chains stand out from other fellow travelers. The group seemed to truly appreciate the qualities of musical “light and shade,” which guitarist Jimmy Page often spoke of maintaining in Led Zeppelin. With the “Sap” and “Jar Of Flies” EPs, Alice In Chains offered up real acoustic-guitar compositions and not just link acoustic guitars with power ballads to win over a female following. Unfortunately, new attempts “Your Decision” and “When The Sun Rose Again” lack melodic fire. The title track, which features guest piano work by Elton John, is similarly listless, maybe even a little maudlin. Chords, choruses and harmonies don’t automatically translate to worthwhile songs. They have to be the right kind. Alice In Chains obviously still has the tools. They just need the right raw materials.

When a musician dies, it’s tempting to reflect on the last things that they said and did in search of foreshadowing. In Staley’s case, there are several tantalizing examples. “Take another hit/And bury your brother/We all die young,” Staley crooned to MTV audiences during the summer of 1990 — only a few months before the alternative-rock revolution would propel the band to the top of the heap. Years later, despite rock star success and excess, Staley and his bandmates were no less brooding in their outlook. “Get born again,” Staley sang in the haiku lyrics on what was the band’s final collaboration. Maybe he wasn’t encouraging his bandmates to carry on without him, but he certainly knew he wasn’t going to see what was coming next.

If “Black Gives Way To Blue” doesn’t exactly point a way forward for the band, it does demonstrate that Alice In Chains is greater and its members more resilient than the toll extracted by Staley’s addiction and death. One of the new album’s principal tasks is simply to reestablish the group after a 14-year absence and that it does. And if the band members sought only to celebrate their roots — even if the new cuts didn’t always make the grade — this record is clearly a new start.

After being held back for so long, who could blame them for being caught up in the joys of just being out there playing again.