MADISON, Wis. — What do you do when you’ve missed your shot at the big time? If you’re a member of Black Rebel Motorcycle Club, the answer is you turn up your amp, keep wearing your darkly romantic heart on your leather jacket sleeve and play your favorite hazy, guitar rock. 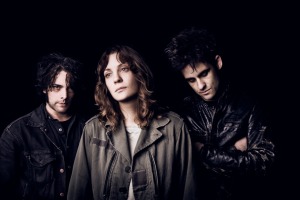 The black-clad, Bay Area band did just that at its show on Wednesday night at the High Noon Saloon in Madison. While the concert and the trio’s current tour are meant to promote their 2-week-old disc, “Beat The Devil’s Tattoo,” these guys aren’t out to impress anyone. Their performance, like most of their six-disc catalog, was an exquisite extension of the Jesus and Mary Chain-on-steroids sound they typically cling to. And in the end, they’re very good at it. The trio could only hope the several hundred vampires and biker wannabes who packed into the club were as devoted to the wall of reverb-rich noise the group created with monstrous guitar riffs, sweet swells of feedback and distorted, sensitive vocals. The dressed-in-black set lined up at the band’s feet certainly seemed to be.

Stubbornness is a trait that Black Rebel Motorcycle Club demonstrates in more that just stylistic terms. That this band is still recording and touring despite ongoing public indifference and arguable diminishing returns is evidence enough of the musicians’ powers of endurance. BRMC’s first and probably last brush with stardom came in 2001 when the band was one of a several garage-rock disciples who appeared poised to overturn the Britney Spears regime then dominating pop music. While rivals like the White Stripes subsequently became a stadium act and the Strokes turned out what’s widely accepted as one of the best records of the decade, the Black Rebels got some traction with their first single, but soon saw excitement about the band dwindle.

The group has its fans, no doubt, but over the years, the band could never break out from the rock underground even as the trio zeroed in on bettering its craft album after album. While many might argue that what kept BRMC from clicking came down to the group being lost in the shadow of the Stripes and Strokes, or major label drama, or troubles with their ex-drummer, the fact is the problem was with the group itself. Although the band whisked the Reid brothers’ love of feedback-drenched guitar wails away from art-school pretense and souped it up with a few Black Sabbath licks and a macho, gearhead attitude, BRMC could never shake their rep that they were carting out bastardized versions of the original. (This despite the group’s occasional dalliances with Johnny Cash-approved country blues, which suggest a much broader range.) Worse still, their music just lacked the star power that could rocket the band from dorm room to arena.

This lack of charisma was evident in how BRMC presented itself throughout its 21-song set onstage. There was never anything resembling a spotlight striking the stage throughout the concert. Both of the group’s co-leaders — bassist Robert Levon Been or guitarist Peter Hayes — remained in shadowy silhouette as they took turns playing frontman. Each man’s singing was a soft, fuzzy seduction glommed on top of an aggressive roar of cascading guitar and bass melodies. Only super new drummer, Leah Shapiro, offered any kind of a performance as she pounded out fast-paced rhythms and bashed at her kit, in the process demonstrating how underutilized she was when she toured with the Raveonettes a few years back.

This isn’t to say the band performed badly — quite the opposite. Rather, BRMC’s stage act, like their songs, is a sincere act of artistic defiance. There’s no salesmanship. Accommodation isn’t a word associated with their image. After all, five of the group’s first seven songs were from the new album. The group has matured to the point that it has stopped caring about dream-of outcomes — for better or for worse. The group has left the major label world behind now, creating its own imprint attached to erstwhile punk label Vagrant Records, which has released albums by Paul Westerberg and others. The band has dropped out of the rat race of big-ticket hooks, glamour shots and musical fashion trends and will stick with its brand, warts and all.

As such, the group’s set list veered in three principal directions: There were uptempo Harley rockers, shoegazer soundscapes and harmonica-accented folk blues. Been guided the band early on, directing them through new tracks like “War Machine,” “Mama Taught Me Better” and “Beat The Devil’s Tattoo.” With “War Machine,” Been’s pained croon reframed the song as a slow-moving, guitar/bass faceoff instead of the Nine Inch Nails cyborg it comes across as on record. For “Mama Taught Me Better,” Been’s deep, muttering bass line tied together Shapiro’s crack drumming with Hayes’ guitar hissing. Playing the album’s title track transformed the pasty, New Wave-looking Been into a sweet-voiced, post-modern bluesman. Howlin’ Wolf might have loved the song’s rhythm if not the ham-fisted beat and hefty volume.

When it came Hayes’ turn at the mic, his smoldering intensity powered their best old songs. The guitarist, whose former wet mop of hair is now greased back Elvis-style, lulled the audience with thick guitar melodies. His playing reached a crescendo with stuttered squeals on “Red Eyes And Tears” (which featured an excellent new coda) or brilliantly alluded to Jimi Hendrix’s “Third Stone From The Sun” on “Shades Of Blue.” And it was Hayes who finally roused the audience from their zombie, head-nodding state with the hard-driving “Berlin.” Shapiro’s kicking downbeat shook many from their drowsy stupor and Hayes’ guitar thrashing made sure they stayed awake.

The group downshifted into some pure electrified blues on “Ain’t No Easy Way,” with Been strapping on an inaudible acoustic guitar while Hayes slipped on a harmonic rack and a slide to give the sounds of Delta a little extra oomph. Thanks to Shapiro’s marshal drumming, the band chugged through this foot stomper like a locomotive from Hell. But instead of continuing on this tangent, the band segued into the mechanized charge of “Whatever Happened To My Rock ‘N’ Roll (Punk Song),” their first coulda-been hit. By now, the crowd’s hands were pumping and the energy was flowing.

This all screeched to a halt when for the next song, Been took a splendid but unexpected solo turn. Abandoned by his bandmates and borrowing Hayes’ acoustic guitar, he pulled deeper meaning from “Sympathetic Noose” even as sound problems barely kept him audible over the audience’s yammering. When Hayes and Shapiro returned, the band pushed forward in the direction of the roadhouse blues with “Shuffle Your Feet.” Again, this was terrific but one wonders why “Whatever Happened To My Rock ‘N’ Roll” had to interrupt this mini-suite of Americana tricked out with high volume.

As BRMC built toward the show’s conclusion, the musicians’ game rose as well. The thunderous “Six Barrel Shotgun” was a kamikaze dive bomb to the skull delivered by the band’s tight-running rhythm section. Hayes unleashed shards of guitar squalls that made the group’s pointed attack more fearsome. Meanwhile, “Spread Your Love” was a batch of rough-hewn Chicago blues. Hayes’ cherry-red Gibson guitar sounded like two T-Rexes grappling with each other.

It only got better when the group was called back for an encore. Hayes and Shapiro initially played Jack and Meg White during a creeping, Zeppelin-sized rendition of “666 Conducer.” This was buffeted by the “Love Burns,” a pop song wonderfully blown-out with rock-god delusions. “Rifles,” a noise-rock gem often overlooked on their first album, topped them all. Been’s soothing vocals were nearly subsumed by Hayes’ belligerent riffing, but taken as a whole, it was a shining example of what BRMC can achieve when all the group’s stylistic elements click together.

From the ear-bleeding heights of the band’s concert, they concluded by taking the music back to its artsy roots. Hayes and Been manipulating their effect pedals to create a beautiful tone poem of sound, over which they sang a duet. On disc, “The Line” is a two-chord mood piece more than a song. Live, the two partners sounded like biker-clad preachers bidding goodbye to their congregation with moaning hymns.

To be sure, BRMC’s music isn’t always a challenge, but it is one that gives back much for whatever allowances it asks of listeners. As Wednesday’s concert demonstrated, the trio steadfastly remains unwilling to compromise to reach that wider audience. But who cares? Success is overrated.

©Copyright 2010 by David Hyland. All rights reserved. This material may not be published, broadcast, rewritten or redistributed.