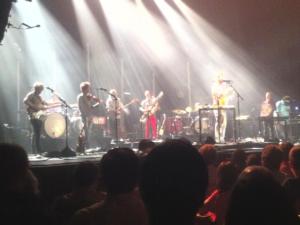 MILWAUKEE — It’s unlikely that Bon Iver’s Justin Vernon thought it would all turn out like this.

A musical project that began three years ago as the creative doodles of an out-of-work, Wisconsin-based indie-rocker culminated on Friday night into a citywide celebration of Vernon’s unique sonic vision. The band’s sold-out show at the regal Riverside Theatre in Milwaukee was an all-out feting that included standing ovations and the reading of a proclamation that it was “Bon Iver Day” within the city limits.

In payment for this ample love from his home state audience, Vernon and his now eight-member backing group took seriously their mission to put on a grand musical demonstration of how and why this all came to be. Bon Iver’s breakthrough, 2008’s “For Emma, Forever Ago,” was a bedroom songwriter’s masterpiece for the century’s first decade and transformed Vernon from yet another struggling musician into the Bruce Springsteen of Wisconsin.

Things have definitely changed since then. He can hire two drummers and a four-man horn section to flesh out his ideas, collaborates with Kanye West and look on as his band’s new, self-titled record debuts at No. 2 on the charts. This is a far cry from the group’s beginnings as acoustic-guitar performances and handing out lyric sheets for audience sing-alongs. Friday’s concert was the kickoff of Bon Iver’s nationwide tour and if this show was any indication of what’s to come, this ride is really only getting started.

The band’s 90-minute set — the first of a two-night stand in the city — was an even draw between songs from the group’s much-loved debut and its more ambitious followup. The bearded Vernon, dressed workman-like in plaid shirt and jeans, paced the set list to emphasize the linkages between the old and the new and easing everyone to a broader conception of this music. The well-rehearsed band began with the latest record’s first track, “Perth,” led by Vernon’s heartbroken voice and Arabic electric guitar lines. The song grew from mournful delicacy to something with concussive majesty, courtesy of the percussionists’ twin bass drums, which exploded like Roman candles. The next cut, “Minnesota, WI” likewise displayed increasing complexity of Vernon’s music. The song initially builds on the richness of Vernon’s singing voice, but ’80s keyboards and sweet horn accents evoke images of foghorns of differing tones blowing in an emo mist. The Kenny G-ish sax soundscapes eventually reveal a mantra of real naked power as Vernon sings “never gonna break” like he’s one dreamer who just won’t give up.

Although Vernon opted to hold true to the original arrangement of “Re: Stacks” and play it alone with an acoustic guitar, he most often relished this chance to play with his new toys when performing older material. The exquisite “Flume” was the standout song on “Emma,” and when the room when dead quiet as he began to sing it, the music became denser as he repackaged the melody with lush vocal harmonies and subdued horn phrasings.

What was remarkable was how easily these performances translated the songs from headphone whispers into something like a low-fi orchestra that could fill a large hall, and yet, maintain that essential air of intimacy. It’s intimacy that is the crux of Vernon’s musical identity. He casts himself as the down-and-out romantic hero in his work. With only an acoustic guitar, he’s the fiery, blue-eyed soul singer with stirring falsetto. And while “Emma” was an album about retreat, loss and the inner strength of someone quietly defying a world that has delivered a few blows, the new record is not surprisingly about renewed confidence and ultimately, expansion. The success has made Vernon a little braver on record and now, on stage, to develop the group’s sound, add instrumental shadings and make the jazz-tinged, noise-rock mishmashes that he has slyly included in many of his pretty meditative songs like “Flume” even more abstract.

The extra instruments gave some songs greater distinction, such as the two violins that were able to create a Civil War waltz out of “Beach Baby, although in most cases, their task was to add color. Rare gems like “Brackett, WI” and “Blood Bank” are brilliantly direct songs on vinyl, but live, sounded even more extraordinary. A bass saxophone trailed Vernon’s descending guitar refrain to make a pulsating rhythm that flowered in the exalted chorus. On record, “Blood Bank” is the sonic bridge between the first album and the second, with Vernon still playing the one-man band. Augmented by more than a handful of musicians that surrounded him, he sang of falling in love with the power to awaken the audience’s passion. 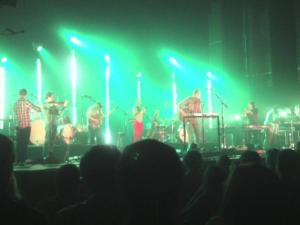 As the concert neared its end, “Beth/Rest” was presented exactly like the Reagan-era prom song it should have been. With an electric piano pattern swiped from Prince’s “Purple Rain” and the drummer cracking eardrums open with his fills, Vernon built the song into a MTV torch song. A New Age soprano saxophone solo was both lovely and cheesy, as Vernon’s spiraling guitar solo crescendo-ed with the spirit of the Purple One looking on approvingly.

Quickly called back for an encore, Vernon assembled his musicians in two groups behind him for a folk-music roundup to sing “Skinny Love.” As the audience got to their feet and cheered, Vernon played the dobro and his helpers sang like they were singing cowboys gathered around the fire. In an interestingly abrupt change, they followed it with a furious, hyper-syncopated cover of Bjork’s “Who Is It” that featured two violins, plenty of beatboxing and despite that above, the abandonment of any pretense that these guys knew how to spell the word “hootenanny.” Vernon even tried a few crude dance moves at the lip of the stage.

Closer “The Wolves (Act I And II)” brought the band back to its roots as Vernon solicited the audience to sing-along at key points. Vernon’s coaching paid off as he, the group and their impromptu backing singers poured everything they had left into the song that builds and builds. The performance was nothing short of magnificent.

When finished, the band members were clearly pleased by what they’d pulled off. They acted very much like a cast who’d just graduated from dress rehearsal to surviving their first trial by fire and nailed it. They exchanged hugs and slapped each other on the back. Unassuming Vernon was humble, but Friday’s performance was affirmation that he need not be. His dreams are within his grasp.

Less assured were fellow indie-rockers, the Rosebuds, who opened the show. The group members are Vernon’s longtime pals from the Raleigh, N.C., music scene. In the year before Bon Iver project was born, Vernon spent time in Raleigh and including the band on this tour was a statement of loyalty and a way to keep upcoming shows something of a family affair.

The four-piece is a charming combo and their brief set showed a group just beginning to step out of a generic milleu. There were moments of inspiration — a driving rhythm, violin melodies — but still pieces out of place. Gorgeous singer-keyboardist Kelly Crisp oddly wore a shiny prom dress and it was easy to draw comparisons to the group’s music as some things on stage were working while others weren’t.

Bon Iver has found its sound, and now, many more than just the rock underground are eager to beat a path to Vernon’s door. Earlier in the day, Milwaukee Mayor Tom Barrett had issued a proclamation declaring Friday “Bon Iver Day” in the city. Vernon’s godfather proudly read the framed proclamation to the crowd, which hailed the group as an international ambassador for Milwaukee and Wisconsin and praises how Vernon’s music embraces its “Wisconsin heritage.”

“Words can’t express how excited and thankful we are,” Vernon said at one point, appearing a little stunned by it all.

A key to the city wasn’t to be had on this evening, but it should be readied for the next time Vernon and Bon Iver swings through town. They deserve it.

©Copyright 2011 by David Hyland. All rights reserved. This material may not be published, broadcast, rewritten or redistributed.