Halloween celebrants everywhere, here’s a new song to add to any spooky playlist. 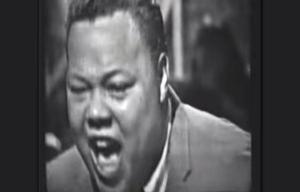 For anyone looking to give their Halloween festivities the necessary frightening edge — and doesn’t everyone need the occasional counterweight to “The Monster Mash” or the ditties from “The Nightmare Before Christmas”? — and “I’m The Wolfman” exquisitely ravages listeners like a classic movie monster.

The song is a novelty single released under name of Round Robin by Domain Records in 1965 and the cut’s growly vocals, boogie-woogie piano and scorching guitar breaks are sure to give any Halloween some needed garage-rock howl. The song is direct ancestor to the psychobilly subgenre, a rockabilly offshoot pioneered by the Cramps and others.

But, what’s almost as bewitching as the track’s campy energy and powerful hook is its mysterious origins.  And what’s the mystery? Call it a musical whodunit.

While attributed to Round Robin — a YouTube video shows Round Robin badly lip synching the cut on “Ninth Street West,” an “American Bandstand”-like show from the era — but according to the not-always-reliable Wikipedia, the song was the creation of songwriter Baker Knight. There are also rumors online that Knight might have sung the song, too. This can’t be confirmed immediately because there’s little information about Round Robin on the Internet.

Based on the Wikipedia article on Knight, his talents as a songwriter were largely unrecognized in his time, but his songs were recorded by many major stars of the ’50s and ’60s, including rock figures like Elvis Presley, Paul McCartney, Jerry Lee Lewis and Ricky Nelson as well as Rat Pack regulars Frank Sinatra, Dean Martin and Sammy Davis Jr., among others.

In the end, as is the case with so many suspenseful thrillers, a detective needs to piece together more clues to uncover the identity of who is truly behind this slab of nearly supernatural sonics. All we can do is marvel at the excellence of this werewolf attack.

Regardless of who is singing and playing on “I’m The Wolfman,” this song deserves a place of honor besides “Bela Lugiosi’s Dead” and other mainstays of the season. Play it now and scare the neighbors.