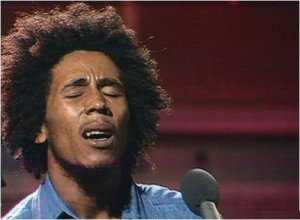 It sometimes seems like music’s great artists just leap out, perfectly formed, from the musical hum-drum, and by the uniqueness and force of their gifts, they’re able to garner the universal attention that talent and vision commands.

The idea that U2 or Miles Davis or Bob Marley had to struggle or had to be packaged in some way is hidden from the public or lost from the story over time. The music is presented like nothing is arranged and the finished product is how it always sounded.

However, thanks to a new “Classic Albums” documentary on Marley’s major label debut, “Catch a Fire,” the audience is transported back in time to see how an unknown Jamaican band -– with the help of Island Records guru Chris Blackwell –- consciously designed a record to capture rock ‘n’ roll fans, and brought reggae to a world audience.

The “Classic Albums” series, which examines rock’s greatest records using concert clips and interviews with the artists, producers and engineers that created them, had been a staple on VH1 a couple years ago.

In the latest series, the Who, U2, Meatloaf, Steely Dan — and believe it or not, Phil Collins — all earn an episode for their seminal work.

Unlike Collins, there’s no doubt about the importance of “Catch a Fire” in rock music and for Marley. It was a beginning in so many ways. It was the start of a period of recognition for Marley and for reggae music. “Catch a Fire” could have been the first “world music” album. It was also the first step as Marley was catapulted to stardom.

As the documentary establishes early on, the Wailers were a popular outfit in Jamaica, but were largely unknown in America and the United Kingdom. Having signed to Island Records, label head Chris Blackwell fronted the band the money to record an album in Jamaica. Later, Marley traveled to England to overdub and remix the tracks with Blackwell.

In their interviews, Blackwell and Bunny Wailer freely admit that the purpose behind overdubbing the Jamaican tracks was to “enhance” them and make the record appeal to a wider audience, one not familiar with reggae and it’s “unusual” rhythms.

To do that, Blackwell drafted a number of American session musicians (they all went uncredited on the album’s liner notes).

Bunny Wailer said that when the band recorded the original tracks, they sought to establish their music on a firm foundation. He said that the overdubs were arranged “not to take away from the basic principles, but to attract the international marketplace.”

That being said, it’s fascinating to hear the different versions of the songs. On a song like “Stir It Up,” the Jamaican version is a marvelous, bare bones reggae song.

However, the album version is very different. Using wah-wah guitar, organ and clavinette, that version is equal parts psychedelic dreamscape and reggae tune. It sounds almost reminiscent of Jimi Hendrix.

On “Concrete Jungle,” session man Wayne Perkins demonstrates the searing guitar solo that he played which furthered a song that sounded like it was seething with unrest and fury. On top, the Wailers’ three-part harmonies are delicate and gospel-like, notwithstanding the taunting lyrics.

A key to the success of the “Classic Albums” episodes is that they never get mired in recording details that only an engineer would be interested in. As the songs are dissected and the focus shifts onto the instrumentation, the underpinnings of the song are revealed which are often obscured by singing or bitchin’ solos. In one instance, a session player reveals how Marley taught him to imitate reggae organ parts.

Other highlights are Bunny Wailer’s solo performances. Armed only with an acoustic guitar, he performed several intense adaptations of songs from the album, including “Slave Driver” and “Concrete Jungle.”

One disappointment is that the only song that appears in its entirety is a concert performance of “Get Up, Stand Up.” Although the song is probably the Wailers’ most popular, it appeared after “Catch a Fire,” on the album “Burnin’,” and this version isn’t that good. The organ is way too high in the mix and it effectively mauls over Marley’s vocals throughout.

To be honest, the video does have some obvious shortcomings.

The most glaring flaw in the video is the lack of history and background on the group. Even though it’s covered, it is far too cursory and it really skips what would be a fascinating detail about the Wailers’ origins: That the group started in the mid-60s as a ska-infected vocal trio in the Impressions, Temptations or Platters mold. The image of Marley, Tosh and Bunny Wailer -– all with closely cropped hair and decked out in clean-cut suits, couldn’t be more of a contrast to their long dreadlocks in the ’70s.

The documentary also lacks any diversity in terms of the interviews, and in doing so, it really fails to show the contributions of the other Wailers. Although “Family Man” and Bunny Wailer are interviewed, Lindo and others within the Wailers’ circle don’t really get to add their thoughts too often. Even Rita Marley, Bob’s widow, is restricted to a few statements describing the history of the group.

Most of the video focuses around Bunny Wailer’s and Blackwell’s comments. That’s not to say that those comments weren’t insightful (far from it), but there has to be more out there. And why did the filmmakers decide to only use one archival interview each for both Marley and Tosh, both of which were largely unrelated to the album?

Another untouched topic was the creative friction that existed between Marley and Tosh. Even though it is mentioned briefly by Tosh’s wife, it’s quickly swept under the rug. That friction, which only allowed Tosh to lead two songs on “Catch a Fire,” would eventually split the band two years after it was recorded.

Another person who is conveniently omitted is legendary Jamaican producer Lee “Scratch” Perry. Although he was not directly involved in the album, Perry’s collaborations with The Wailers prior to “Catch A Fire” effectively laid the groundwork for it.

As many writers and biographers have reported, Perry manned the helm during a critical period for the band as they transformed from a ska vocal trio to a full-fledged reggae ensemble. He reportedly encouraged the three-some to develop their unique vocal harmony and to refine their songwriting.

Futhermore, Perry introduced the Wailers to “Family Man” and Carlton Barrett. The Barrett brothers, who would play with Marley until his death, became the band’s rhythmic backbone and brought an entirely new sound to the music.

Despite the negatives, one of the truly magical moments is a performance clip of the band playing “Stir It Up” on British TV. As the camera focuses in on Marley’s face and you listen to the tender singing of Marley, Tosh and Bunny Wailer, the group’s connection to and the influence of vocal-harmony groups like the Impressions becomes crystal clear. With all the focus on creating music that would appeal to rock fans and the rhythmic or melodic differences that exist, there’s something uncannily familiar about it.

In spite of the Wailers’ and Blackwell’s efforts to cross over, “Catch a Fire” only sold 14,000 copies, Blackwell said.

As time would go on, however, and Marley’s popularity began to build internationally, the album would go on to sell well beyond that.

Without Bunny Wailer and Peter Tosh (who would both go on to successful solo careers), Bob Marley and the Wailers would continue to pursue a rock-friendly sound, and the group would even add several Americans (most notably guitarist Al Anderson) to the lineup. Eric Clapton’s cover of “I Shot the Sheriff,” only raised Marley’s profile.

Although there’s no clear idea on when and if VH1 will air this new installment of the “Classic Albums” series, each one has been done with the attention of a music lover. We can forgive whatever deficiencies exist in the “Catch a Fire” episode as arising from the obligations of appearing for a TV audience.

A strange side note to the documentary is that in all the explanations of how the Wailers struggled to make their music more “palatable” to an Anglo-American audience, I feel I’m beginning to understand reggae music better. As they took steps to speak some of my musical vernacular, perhaps I’m beginning to pick up a bit of their’s.