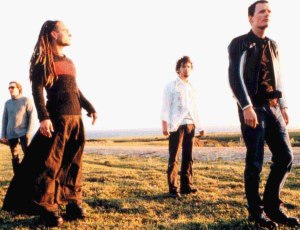 When rock critics use the word “psychedelic,” it’s basically the equivalent of a slur. The word carries with it the burdensome descriptions of being “dated,” “corny” or a collective shaking of heads : “What were we thinking?”

But I don’t know what they’re talking about. I see nothing wrong with a little wah-wah guitar, some otherworldly lyrics and a dash of phasing. It never sounds dated (maybe that’s because I’ve never known a world without it) or naïve, but rather abstract, or at its best, even a bit surreal.

And it seems that the members of Unified Theory agree with me on this point. On their self-titled debut, this new band (featuring ex-members of the alternative stalwarts Blind Melon and Pearl Jam) has created a sound that borrows quite a bit from the frolicking ’60s, albeit with a modern twist. I only wish the songs were better.

Another way that Unified Theory harkens back to the past is that they really are a bona fide alternative rock band — with the roaring guitars and wailing vocals that would have been right at home on the airwaves in 1994. Six short years later, alternative music is synonymous with bland pop bands like Smashmouth or meathead metal like Limp Bizkit. The mighty have fallen.

Back in the early ’90s, three-fourths of the members of Unified Theory were at the center of the alternative music craze. Drummer Dave Krusen was briefly drafted as Pearl Jam’s drummer, playing on their debut “Ten.” Krusen later left the band and ended up behind the set for alterna-poseurs Candlebox.

Meanwhile, guitarist Christopher Thorn and bassist Brad Smith were in Blind Melon. Thanks to a pair of hit singles (“No Rain” and “Tones Of Homes”), Blind Melon were alternative’s crazy hippy kids. Frontman Shannon Hoon’s flowing locks and the group’s jammy style seemed a bit out of step with Seattle grunge, but there was something sweet and sincere that radiated from their music.

With Blind Melon’s popularity waning in the mid-’90s, Hoon offed himself courtesy of a drug overdose. There were rumors that the band planned to continue on with another singer, but it was not to be.

After hooking up with new singer Chris Shinn and later Krusen in the late ’90s, the new band — calling itself Luma and later Unified Theory — began working up original material for their debut. And from the sound of the record, they’ve succeeded in shedding any feel of the members’ previous outfits.

In a word, the music is very esoteric. Shinn’s thin, high voice and the delicate guitar playing (the bass and drums are mostly irrelevant) invokes a dreamlike, hovering feeling. The band’s sound is almost like a sunny version of goth godfathers Bauhaus.

This album is a very Californian album, and not just because song No. 2 is called “California.” It evokes images of oceans, rainstorms, desert breezes and warm nights. The record sounds like it was designed to be played while driving a car late at night, with soothing guitars and Shinn’s voice slithering in your ear.

The first cuts, “Cessna” and “California,” are a springboard headfirst into the waves of sound. Shinn’s lyrics are fairly obscure and, as such, are undifferentiated from his wordless moaning and crooning. Instead, the vocals mirror the spacey guitar melodies on a higher pitch. His voice is like a lower-range banshee wail.

Although the group’s free-floating music pushes the attention-span envelope, they never veer into Pink Floyd territory or into endless jamming.

Unfortunately, the songs never really move beyond repetitive mood pieces. There’s rarely a melody and when there is, we’ve already heard it on the record. The tunes sound almost like caricatures of emotions — like loneliness or ecstasy — and while some work, others don’t.

The group’s neo-psychedelic formula is the most successful at the album’s core, on songs like “The Sun Will Come,” “A.M. Radio” and “Fin.” With guitar lines swaying and occasionally swooping in with crunching riffs, these songs are musical torrents.

And what psychedelic album would be complete without an Eastern-tinged song? “Passive” is a classic George Harrison-type song and features Middle Eastern rhythms and sitar embellishments. But without anything resembling a firm chorus, the song moves along and then dissipates.

Despite the group’s penchant for falling into clichés, Unified Theory does hint at greater things down the road. The album’s best moments are when they seem to have a clear lyrical idea — an image that the music can imitiate.

Perhaps if the group had more time to develop before its debut, a unique musical identity would emerge.