The state of rap music is in flux.

Although the music’s prospects looked bright a few years ago — bolstered by growing sales figures and a larger profile in the media — astute artists and observers noted at the time that there was danger ahead. Many saw that the music faced the prospect of becoming stagnant because of the preponderance of wannabe gangstas more interested in recycling old jams than in pushing themselves artistically.

By the time Outkast released its latest, “The Love Below/Speakerboxxx,” which follows one of the highest-selling, non-Eminem rap albums in recent memory, “Stankonia,” Andre literally and figuratively changed his tune. In interviews to promote the album, he derided the current scene and openly admitted to no longer listening to rap, preferring to pay homage to “freer” genres like funk and jazz.

But while Andre appears to have given up the good fight, new releases by hip-hop outsiders like Atmosphere and Bubba Sparxxx demonstrate that there’s still some who appear determined to stand out on their own and fight for creative freedom in the rap music.

Four albums into his young career and it seems Atmosphere’s MC mastermind Slug is having a something of a one-third-life crisis. 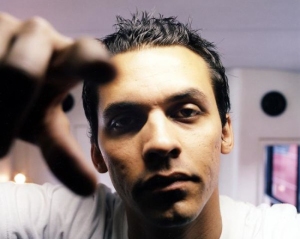 While the Minneapolis-based rapper tackled woes of the heart in past works, throughout “Seven’s Travels” he’s now ranting against his adoring public as much his critics and competitors, and regretting his many weaknesses (mainly women). The only thing he seems content about is that he’s still calling Minnesota home.

The record begins with “Trying To Find A Balance,” a track boiling over with frustration-fueled passion. Set to an ascending-descending bassline and a cheap-sounding snare drum beat (created by the group’s other half, producer Ant), Slug rails against the rigors of life on the road and the dichotomies of being adored on the mic by some and then treated like “a leper” by others. His voice sounds puffed up with tough-guy machismo as his rhymes alternate between bitterness with occasional hilarious interludes.

With “National Disgrace,” he takes aim at reality-TV-loving American culture. With a vocal cadence that echoes Chuck D. from “Black Steel In The Hour Of Chaos,” Slug perhaps gets to the core of his beef when he says, “Open up your heart ya’ll and let me in.”

Slug’s fury is also pointed inward as well. Spurred on by a strutting funk rhythm, “Reflections” has Slug rapping about himself, speaking as a remorseful big, bad “wolf” warning his prey that she doesn’t understand his player ways and had better watch out.

Equally confessional and brimming with the spirit of ’70s soul and funk (including a flute), “Good Times (Sick Pimpin’)” is the story of a helpless predator who prefers to target ladies with self-esteem issues.

Taking such an introspective stance on a record can often be a slippery slope. While being so candidly self-critical is original (especially in hip-hop) and can offer refreshing points of view, such material is also susceptible to moments of self-pity, melodrama and words of wisdom that aren’t particularly wise.

“If they only know how real this life gets,” Slug says early on to his detractors. Such a statement begs the question: And this comeback is really going to shut them up?

These observations, however, will likely only rear up after repeated listenings of “Seven’s Travels,” once the music’s charms have faded so as to lay bare all the lyrics.

The music is another factor that sets Atmosphere apart from other rap acts. In contrast to mainstream’s obsession on brash, hook-filled choruses, Ant’s productions are fairly unobtrusive and clinical in execution. The samples fill space and support the rapping, but rarely blend together or build towards a chorus. Instead, he wants listeners to marvel how Slug works off classical music strings on “Denvermolorado,” or the elephantine fuzz guitars on “Cats Van Bags.”

For the album’s conclusion, however, “Always Coming Back Home To You,” Ant developed his most conventional musical production: a stark repeating acoustic guitar sample that Everlast would snag if he could. And yet, it fits comfortably as Slug’s voice gets a bit tender to rehash memories of life at home.

While Atmosphere can typically be counted on to avoid copying their non-Midwest brethren, like many of his fellow rappers, Slug hasn’t forgotten where he’s from. Although his rhymes on “Seven’s Travels” feature plenty of shout outs to Twin Cities’ haunts and hometown people, his most heartfelt statement comes in the form of the CD’s secret track, which might be hip-hop’s only full-out tribute that pimps living in the North Star state.

“Seven’s Travels” restates that Atmosphere is creatively and literally, in its own world.

It’s next to impossible to evaluate a hip-hop artist like Bubba Sparxxx without gazing through the prism of his fellow Caucasian rapper, Eminem.

Both are obviously white in a black male-dominated game, both signed to Interscope Records and both enjoy relationships with preeminent producers/mentors.

But while Eminem enjoys the fact that his every creation is fawned over because of the amount of hype that accompanies a reigning superstar, Sparxxx — with some invaluable assistance from his producer Timbaland — has quietly been expanding hip-hop’s boundaries since his debut album dropped in 2001.

Sparxx and Timbaland’s latest handiwork, “Deliverance,” should only reinforce this notion. By pairing his drawl-inflected rhyming skills with rib-shaking tracks that incorporate various musical styles, Sparxxx poses a much different kind of threat to hip-hop’s pecking order. Instead of outdoing his rivals, Sparxxx is playing by his own rules and winning.

On “Deliverance,” the 26-year-old Georgia native revels in his southern roots — lyrically and musically — and yet somehow is able to seamlessly combine it with Timbaland’s love of futuristic-sounding beats and rhythms.

The album’s first half borrows healthily from the elements of the southern roots music (especially blues and country).

Built around a bluesy harmonica lick, “Jimmy Mathis” sounds like a hip-hop update of the old family front-porch jam. Of course, a washboard could never make a groove like this danceable.

The next track, “Comin’ Round,” might be Timbaland’s attempt at a world-music melding masterpiece. As Sparxxx raps with pride about life in the south, the music is a subtle amalgam of the musical styles the south’s population brought with them in the 18th and 19th centuries. The melody is based around a fiddle that sounds suspiciously like it comes from Celtic music while the rhythm is supplied by Afro-Cuban percussion and pulsating snippets of bass straight from ’70s style Stevie Wonder.

“She Tried” is the closest a hip-hop artist has every gotten to capturing the spirit of a “tears in your beer” country song. A story of heartache and betrayal, the song features a squeaky fiddle and is punctuated by an enormous thudding beat that sounds like its coming from a marching band-sized bass drum.

From there, the album’s musical tone changes so as to sound like a more contemporary production. “Nowhere” builds off the string melody and programmed beat of Justin Timberlake’s “Cry Me A River.” Timberlake later makes a prominent guest vocal appearance, trading lines with Timbaland on the sweaty club funk of “Hootnanny.”

Sparxxx returns to trumpeting the glories of the south in “Like It Or Not,” a track built around a busy bassline, hyperactive horn playing and falsetto background vocals that sound like the Neptunes’ Pharrell Williams (but it’s not).

“No matter where I hang/People love my twang,” Bubba says.