Getting older is something that few of us do gracefully. 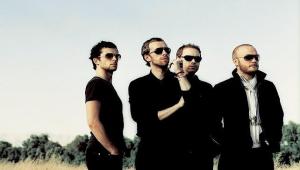 Aging is a slow, subtle transformation, creeping along like the movement of a glacier. It’s so slow in fact, that most people don’t seem to notice that they’ve changed at all. When they do, this eventual realization can be startling. One day, all opportunities seem open. But before you know it, all those doors have been slammed shut.

While U2 continues to sell albums and stadium seats at a rate befitting rock’s reigning kings, Bono and company must know deep in their hearts that an album as formulaic as “How To Dismantle An Atomic Bomb” suggests that their best days are behind them. To repeat yourself is to signal that you’re running out of gas. (Read Soundbytes Review)

And then, there comes along a band like Coldplay. The British quartet is young and ambitious, and their evocative music is ornate and breezily melodic. They don’t yet carry the burden of having all their new efforts compared to a “Joshua Tree” or “Exile On Main Street” of their youth. That may come some day, but for now, people are more focused on their future than on their past. Coldplay’s recorded legacy thus far is a pair of monster-sized, hit releases that have established them as the preeminent band of the new generation.

What surely arouses a feeling of jealousy in Bono and others is the fact that the group’s new record, “X&Y,” establishes that this is a band in its creative ascendancy. These are the new kings waiting in the wings.

This isn’t to say that “X&Y” outstrips the band’s last effort, 2002’s pop-rock behemoth, “A Rush Of Blood To The Head.” Absent are the anthems prevalent on that record, but the new album is still a lustrous, satisfying collection. Its few faults surely won’t impede Coldplay’s progress. This record is very good but not great.

These 13 songs have streamlined, strong melodies that compliment the aura of airiness throughout the record. The instrumentalists work well together to build this reverb-heavy music that serves as the backdrop for lead singer Chris Martin’s delicate voice. On “X&Y,” Martin has maintained his ability to coax listeners through a song’s shifting moods.

On modernist pop songs like “White Shadows” and “Speed Of Sound,” he jumps between sounding pensive to sounding gregarious. The slow-building “Swallowed In The Sea” could easily come across like an artier power ballad, but there’s an intensity in Martin’s singing that burns away any feelings of pretense or cliche. At times, he may sound like a sad puppy, but by the time he finishes, his voice is a roar.

On “Square One,” he croons as the band’s rhythm section creates a disco beat with a synthetic swing similar to that trademarked by U2’s Adam Clayton and Larry Mullin Jr. Between Martin’s voice and the rhythm, guitarist Jon Buckland executes an array of echo-laden, Edge-style riffs and fills. By the song’s end, however, the group is no longer channeling U2, and has switched to the Beatles, with Martin performing a Lennon-esque coda.

Throughout, Martin’s voice varies with a sense of experience and emotional confusion. With a nonsequitur line like “I’m on the top, I can’t get back” thrown in, one might think the band’s meteoric rise is causing some mixed feelings.

Feeding these emotions are Martin’s lyrics, which continue to favor the personal, meditating on plainspoken, private truths rather than constructing a clever story. The yin-yang imagery that he employs for “Fix You” is a tired writer’s trick:
When you try your best, but you don’t succeed

When you get what you want, but not what you need

When you feel so tired, but you can’t sleep

But like all great vocalists, the way that Martin sings the melody brings forth a power and vitality out of his rather ordinary verses that isn’t apparent on paper.

Beyond the lyrics, the biggest gripe that one might have with the record is that the band doesn’t break any mold that it had established on its first two albums. The songs are typical Coldplay songs, and the fact that these tracks don’t display any new flavors is perplexing.

Another curiosity is that while Martin and his bandmates exorcise their feelings of unhappiness, there’s an unsettling lack of warmth in the production. Like so many post-’70s English acts, Coldplay’s music has an ethereal quality that envelops the melody and also buries the thrust of the rhythm section (call it the legacy of Brian Eno). As passionately as the group plays, there’s always a sense of chilliness, a detachedness that permeates the music.

It would be surprising to think that, in the years to come, people would feel passion for the songs on “X&Y.” These tracks aren’t brazen, nor are they artistically challenging enough win the hearts of skeptics.

But as is the case with U2, these factors won’t likely affect the band’s place on the fast track. At this stage in their career, any album with several strong songs is seen as positive progress for the group. Popular faith still holds — rightly or wrongly — that the band has not yet crested.

Youth has its privileges.