Success breeds expectations. When you’re playing music in your bedroom, a garage or in a small club, there are few people there to see you fail.

So when you overcome the odds and do graduate to playing big rooms, the down side is that there’s plenty of space for failure.

The White Stripes “Get Behind Me Satan”

“Get Behind Me Satan” is the most curious effort yet to come from what is surely one of rock’s most intriguing bands. 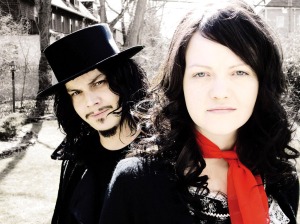 Putting aside the White Stripes’ unusual image and public behavior — the red, black, and white only outfits, the controversy of whether they’re really siblings or ex-spouses, the odd appearance with Loretta Lynn at last year’s Grammys, and even the recent quickie marriage to a Brazilian model — this is a group that has had a different agenda from the very start.

While we were all waiting for the boy-band and teen-pop storm to pass, band leader Jack White was quietly making raw-sounding, indie albums that revisited pumped-up blues but performed with only a two-piece lineup. On the group’s jaw-dropping-ly-sensational breakout album, “White Blood Cells,” he wrote a song that just quoted lines from “Citizen Kane.” White then defied doubters by following up a hit record with another that was almost as good.

This all makes for the kind of curiosity that has continually followed the band, and frequently overshadowed their music. It also poses a natural question: What is going on inside White’s head? “Get Behind Me Satan” should only amplify those feelings of puzzlement.

The record — their fifth — is the most varied musically but also the most inconsistent. One can credit White for trying to break out of the band’s garage rock label by toying with bluegrass (“Little Ghost”) and hard-edged new wave rock (“Blue Orchid”).

Although none of the songs top five minutes, many are overly repetitive and seem to go on forever. This is particularly the case in the songs that show a clear Dylan-influence — “Forever For Her (Is Over For Me),” “Take, Take, Take,” and “I’m Lonely (But I Ain’t That Lonely Yet).” The quivering emotionality of White’s singing, the clever lyrical hook, and — aspects that would ordinarily redeem such songs — are outweighed by how they seem to just meander along repeating the same information. The songs just recycle the same piano chord changes over and over until it mercifully concludes four long minutes later.

Wailing rocker “Red Rain” has much the same problem. It alternates between an annoying melody played by a chorus of bells and then gives way to a monstrous yet monotonous slide-guitar lick. The piano of “White Moon” builds and builds momentum only to fizzle before reaching a satisfying musical destination. Is White running out of steam creatively?

In between the tedium and unfulfilled promise, there are moments of merit here. On “My Doorbell,” White repeats the lyrics and chorus ad nauseum and a piano consistently accents each verse the same way, but driven by Meg White’s “bam” and “smash” drumming, the song comes together and takes off in a way few songs on the record do. Similarly constructed as “My Doorbell,” “The Denial Twist” is a funky jamboree and White comes across as Robert Plant doing a huckster rap. During “Instinct Blues,” White seems like he can barely control his guitar. It purrs and hisses. White lets slip a yelp when the guitar seems to wrestle from his grasp, and it’s this moment of music busting loose, and the accompanying sense danger, that makes the song.

Meg White had a track all her own on the group’s last release, but she’s only allotted 30 or so seconds for “Passive Manipulation.” Vocally, she’s still reminiscent of the Velvet Underground’s Maureen Tucker, and it’s a temporary break in Jack White howl-fest.

Much like any curiosity, “Get Behind Me Satan” is something you can experience once, but once it’s over, you won’t likely revisit again (maybe just for a couple of songs). The next question that arises around the White Stripes is whether they can recapture their creative juices or they’ll be known more for their idiosyncrasies rather churning out great albums.

It’s a rock ‘n’ roll adage: you get clean and you get boring.

It explains the creative lobotimazation of dozens of groups — from Aerosmith to Jane’s Addiction. On one album, their music spits fire and their lyrics are provocative. After one stint in rehab, their next record (and succeeding efforts) steer a more moderate course, playing it musically safe and spouting self-help messages.

Once an artist seeks to quell the neurosis that’s driving them to substance abuse, most inexplicably rob their music of much of its energy and daring. It’s a cruel side effect of getting healthy — sad and twisted but all too often.

Given this, it seems impossible that “With Teeth” could be as great as it is. Flushing the bad habits that fogged every Nine Inch Nails’ successive release since “The Downward Spiral,” band brainiac Trent Reznor is now demonstrating a musical focus and intensity unseen since the band’s early-to-mid-’90s glory days. His healthier lifestyle inexplicably hasn’t tamed his skills nor his predilection for darke themes. No AA-speak here.

This record should vault Reznor into the rankings as one of the premier producers of his generation. Reznor is still a meat-and-potatoes-type lyricist — his lyrics are dominated by rants of self-loathing and romantic angsting — his ability to construct unqiue yet infectious rhythm competes with hip-hop’s top tier.

And this is what Reznor is: a rap-style beatmaker dressed like a vampire. (Someone — Ministry’s Al Jourgensen perhaps — was quoted as saying that industrial music is just disco played through a crappy speaker. In Reznor’s case, this is an apt description.

(The fact that Reznor hasn’t been tapped more often to be a producer is truly surprising. With the exception of Marilyn Manson’s early records, Reznor’s production resume is mostly limited to remixing the occasional single. Ex-Rage Against The Machine frontman Zack de la Rocha reportedly spent time a couple of years cutting tracks with Reznor for his own solo debut, but the results of their collaboration appear to be locked in the same vault where Axl Rose is keeping the new Guns ‘N’ Roses’ disc).

Excluding the album’s final two piano-based tracks, “With Teeth” is a cache of heart-pumping grooves. As in hip-hop, the music isn’t defined by the melody but by the beat. Corrosive guitar licks and evil-sounding keyboard lines support the musical vision and jack up the tension.

As has been much reported, Reznor got some all-star help in his beatmaking this time out in the form of Foo Fighters leader Dave Grohl, who returned to the drum kit for the first time since his brief membership in Queens of the Stone Age a couple of years ago. Unlike his time with Queens, Grohl’s drumming on “With Teeth” threatens to steal the show.

Grohl’s spotlight moment is “The Collector,” where he piledrives the rhythm, but also creates a thud with his bass drum so powerful that propels the song forward. If there was ever any doubt that Grohl is the man to fill John Bohman’s drum stool in a Zeppelin reunion, here’s the proof. Reznor’s vocals — sometimes a muttered mantra, other times a yell — conform along with some shrill guitar fragments around the thrust of Grohl’s kitwork.

Beyond harnessing Grohl for the album, Reznor’s other smart move was to focus on creating direct and compelling songs. While he still employs unusual sounds as pieces of the musical puzzle (like the whirling sound of a blender on “Sunspots”), these tracks are thin on the tedious musical tangents that were so rife on recent Nine Inch Nails discs. Instead, each song moves with purpose and builds to a climax before concluding.

And although all the songs have a common, discernable structure, there’s plenty of variety here. The pretty, piano-based “All The Love In The World” before the drum machine kicks it into high gear and Reznor’s jealous rants overflow into a sonic interpretation of multiple personality disorder via a stack of layered vocals. “Only” fuses elements of funk and ’80s new wave that come together to make a darksider version of the Bee Gees’ “Stayin’ Alive.” The frenetic “Getting Smaller” is the record’s most furious moment, snarling guitars create a whirlpool of sound that’s claustrophobic and mirrors the paranoia of the lyrics.

Paranoia is something that Reznor can now wipe off his radar. “With Teeth” reestablishes that Nine Inch Nails is no longer a band treading on past accomplishments, but still a vital entity.

The record also makes the implicit suggestion that they should consider putting Reznor’s face on “Don’t Do Drugs” posters. They could place them in concert halls and recording studios around the country with the slogan: “Get Clean And You’ll Record Your Best Album In 10 Years.” Of course, that’s only if you don’t start quoting AA in your songs.