Not quite a case of the song remaining the same, but Dashboard Confessional’s new album demonstrates an increasingly savvy approach to their patented heartsick power ballads. 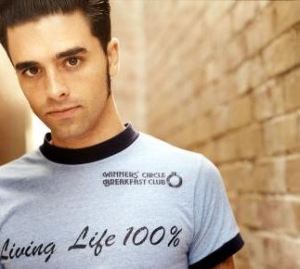 Chris Carrabba’s posters might line the walls of hundreds of young teens’ bedrooms, but in return for this gift to young women everywhere, their older sisters just keep doing him wrong, continually bewitching this poor man.

The consequences of this injustice are an almost limitless supply of new Dashboard Confessional torch songs. All of the tracks demonstrate varying moods but share the same purpose: watching Carrabba wrestle with seemingly every facet of love.

The Florida-reared, lite-hard rock group was the late ’90s brainchild of the tattooed dreamboat Carrabba, but became a full-fledged band only a few of years ago. However, it’s still completely Carrabba’s venue to air his diary set to bad poetry and decent, swelling pop melodies. The young people call it emo.

Not quite a case of the song remaining the same, but Dashboard Confessional’s new album, “Dusk And Summer,” demonstrates an increasingly savvy approach to Carrabba’s trademarked, lovesick power ballads. Interestingly, the songs are less about brooding but instead focus on being passionately entranced with someone. Naked passion is something that Carrabba seemingly has in spades, and on this album, he’s using killer choruses to deliver the message.

This album’s not-entirely new but certainly improved tact reaches its culmination early with the record’s opening track, “Don’t Wait.” Carrabbas’ needy message — delivered with a powerfully annoying whine — isn’t pain. Rather, he’s pleading with his beloved to drop her shields and express her true feelings. These songs are intensely personal, expressed in a generic kind of way, but are firmly centered on Carrabbas.

From the outset, one might suspect that the involvement of producer Daniel Lanois — famed for his albums with U2 and Bob Dylan — on “Dusk And Summer” might tame Carrabba’s hogging the spotlight and offer more room for the group’s instrumentalists. After all, Lanois has shown a talent on tape for corralling Bono and emphasizing U2’s rhythm section in the music.

This is wrong on two counts. First, Lanois is only credited with co-producing one track and producing the vocals on another. Second, Carrabba might be an increasingly clever pop songsmith, but still shows no sign that he knows how to share.

Take “The Secret’s In The Telling,” which is a mid-tempo number that swiftly explodes into one of the record’s most appealing choruses — a hook so big and dumb that it’s surprising that Carrabba never gets sick of returning to it. Wimpy-sounding drumming and trilling guitar play backup but are kept so low in the mix in favor of Carrabba’s pained vocals that it’s a sham to label Dashboard as anything more than a one-man band.

“Currents” adds electric piano to the recipe but the dish is still the same. The verses are angst-filled filler and we’re pretty much left to wait for the group singalong chorus, but even that is consumed with Carrabba’s pathos. “Let it burn!” he yells in his wuss-iest voice.

Only during “So Long, So Long,” can Carrabba bring himself to make room for someone else, namely when he shares the mic with guest vocalist Adam Duritz from Counting Crows. Just as he did with the Wallflowers’ “Sixth Avenue Heartache,” Duritz proves that he’s able to bring out the best of someone else’s radio gem. Sometimes harmonizing, sometimes taking turns, the two singers work off each other in front of the distorted sizzling of the guitar. The only black mark on the song is the “da da dah” refrain — ordinarily I’d give Duritz credit for his Van Morrison-style scat singing — but during the song’s outro it’s very cheesy. (You don’t even want to know the corny lyrics that he has for “Stolen.”)

“Slow Decay” is a better attempt at fair play. The track hits hard and the guitar and bass are more aggressive. The music is still playing setup for the vocals, it’s a little less obvious and passive. There’s a feeling that bassist Scott Schoenbeck and guitarist John Lefler are finally putting up a fight. They are really no match as they are subsumed by Carrabba’s giant chorus.

Similarly, the slicing sounds of crunchy guitar chords get “Reason To Believe” off on the right foot before we make room for Carrabba’s vocal groveling. Lefler’s guitar gallops in the background during the verses but switches to a high-pitched web of notes during the chorus. The stronger sound makes for a better partner to all this vocal flamboyance and emphasizes the emotionality.

Carrabbas’ emotional life is what this is all about. Even on “Dusk And Summer” when he dwells on positive feelings, it continues to feed into his music. Like Middle East oil, it would seem a necessary evil for those who enjoy his hard-rock singalongs. Without women, what would Carrabbas have to bellyache about so exquisitely? Gas prices?

All of his young admirers owe their older sisters a big thank you.