So much about creating pop music is essentially building a better mousetrap. It’s really difficult to be a true original. 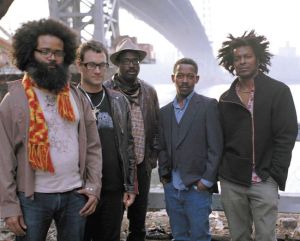 Artists great and small take the sounds and songs that surround them and construct something “new” — sometimes with ordinary results, but occasionally with something really special.

Fans typically don’t notice that Bob Dylan’s “Masters Of War” borrows the melody from an old English folk song or that the Rolling Stones and the Beatles both liberated lines and rhythms from Chuck Berry tunes. How about Sting cribbing some lyrics from Led Zeppelin for “Every Breath You Take”? (And we shouldn’t even get into all that Zeppelin swindled from the blues masters.)

Every once in awhile, an act comes along that pulls the elements from this common musical salad bar together in a thrilling and unique way. New York’s TV On The Radio is it. Although the inter-racial, art-rock combo doesn’t completely reinvent the musical forms and influences (post-punk, jazz, dub and doo-wop) that they effortlessly fuse together, they do assemble them in such a mind-warping way that it almost seems brand new.

With a growing renown among those who appreciate such benders of music’s frontiers. and a new album, “Return To Cookie Mountain,” that does just that now in stores, the Brooklyn, N.Y.-reared quintet is poised to not only broadcast their songs to an even larger audience, but maybe spawn something like a new genre of music.

Since forming as a collaboration between visual artists Tunde Adebimpe and David Andrew Sitek in 2001, the band has taken on a greater degree of seriousness and scope as the years pass — adding musicians as their ambitions grew. If not positioned to sell out the Astrodome anytime soon, the group has elicited more of a buzz than fellow noise-rock trailblazers like Killing Joke and Pere Ubu ever did (the latter’s “Final Solution” made it into TV On The Radio’s set during a recent tour with Nine Inch Nails).

Of course, what’s kindled this interest in TV On The Radio is the truly shock-and-awe brilliance of the band’s first two releases, “Young Liars” EP and their 2004 full-length, “Desperate Youth, Blood Thirsty Babes.” These were both some of the most fiercely original and seamlessly eclectic records to come along in years. The group’s sound was hard to pin down, much less distill into its constituent pieces: blaring, shrill guitars, ’80s New Wave keyboards, complicated, multi-layered vocals and electronic drum beats. They make Radiohead seem like stadium rock.

The album, which won the group the snarky Shortlist Music Prize, bolstered the band’s reputation and led to Interscope Record subsuming their record deal with former hardcore punk haven, Touch And Go Records. The band’s new disc clearly has a lot of folks rooting for it.

The band repays all that faith by truly letting their freak out. This new one is an even more expansive, complex and befuddling listen. Unlike the songs on “Desperate Youth, Blood Thirsty Babes,” these new tracks don’t have central, defining element to each song that functions as a core melody, like the interweaving vocals on “Staring At The Sun” or the descending, angular guitar attack of “Poppy.” The “Cookie Mountain” songs have just as many awe-inspiring moments as their predecessors, but the musical structures are more patchwork and sometimes disorienting. Adebimpe and Sitek’s art background is clearly evident in their compositions.

The record’s challenges start from the beginning. The opening track, “I Was A Lover,” has a water-logged, lumbering rhythm that wheezes two steps forward and then stumbles back due to a sputtering drum machine. In the background, high-pitched guitars hiss and a keyboard stalls and malfunctions. Adebimpe’s deep-throated voice keeps listeners off balance, fluctuating between a mournful croon and a Prince-like falsetto. As the songs trips into a bridge, the instrumental mess clears and a perfect dub-reggae piano melody is a short moment of quiet perfect execution amid the chaos.

Drummer Jaleel Bunton keeps “Hours” an orderly stroll with a Ginger Baker-ish jazz drum pattern. This and a monotonous piano chord serves as the funky platform for Adebimpe’s spookily sung pep talk for a used and abused beauty. A baritone saxophone that grumbles below the surfaces for most of the song finally breaks free at the track’s final third and leads it out.

The midtempo funky stroll of “Province” is dominated by an array if voices all fighting for dominance. Adebimpe and guitarist Kyp Malone’s tangled vocal harmonies, which were such a defining characteristic of “Desperate Youth, Blood Thirsty Babes,” are vocals combatants here, although they are sometimes at loggerheads in this pleasingly episodic free-for-all. The singing is sometimes a blend of their voices and other times a bunch of screaming falsettos, like the one that Beck used in his plastic-y R&B period. Even a guest appearance by David Bowie is given little room in the spotlight, compete as it does above the incongruent piano pounding and clanging, New Wave guitar fog.

But just when you think this an album full of only SoHo musical stylings and beret-wearing pretense, there’s the record’s single, “Wolf Like Me.” Chugging along with a funky backbeat and ’80s goth synthesizers, the song is the record’s most accessible moment. It’s also a break from all the abstract lyrics that prevail as it’s a semi-serious love letter that seeks to convince the object of his affection to join him in becoming a werewolf.

“Cookie Mountain” also marks the bearded Malone’s arrival as part of the band’s creative brain trust. He wrote or co-wrote seven of the record’s 14 tracks. His contributions are largely indistinguishable from Adebimpe and Sitek’s work, but Malone does sing lead on two of his songs. Malone’s lisp-y singing is intriguingly wimpy on the thundering, boisterous “Let The Devil In,” but then showboats like a Vegas ham above the incessant keyboard humming on “Blues From Down Here.”

The vocals also form the key melodic device on “Dirtywhirl,” but it’s hard to tell what tradition Adebimpe’s singing is coming from. His fleet-footed phrasing suggests the blues, but his enunciations and glissandos are old-fashion R&B. On the gloomy, epic-sounding “Wash The Day,” Adebimpe sounds like a polished metal god, powering his way through pounding drums and tinny ear-splitting guitar.

“Wash The Day” is the record’s final track in the rest of the world — where “Cookie Mountain” was released in July — but three bonus tracks were added for the North American release. The additional songs — “Snakes and Martyrs,” “Things You Can Do” and a bass-heavy remix of “Hours” by hip-hop experimenter El-P — are far more straightforward than those on the rest of the disc. In fact, “Things You Can Do” might be one of its best tracks. Initially, a flute and faint organ wrap around a tough-sounding reggae bassline. As Adebimpe begins to ratchet up the passion and condemn his enemies, layers of low-pitched horn blasts take command of the song’s direction and form a repeating melodic phrase that slides around percussive guitar chords and Grateful Dead noodling.

Noodling might be an appropriate description for much of “Return To Cookie Mountain” on a listeners’ first pass. There are few hooks and its scope — even within a solitary song — can be disorienting. But this is one of those albums that demands repeat playings that can reveal deeper meaning and downplayed beauty. And this is why they’re so unique.

Once again, TV On The Radio has a new mousetrap that seems destined to capture music nerds and fans alike.