Ever since he was given super-exclusive entre to the hip-hop world by Dr. Dre, rapper the Game has accomplished little in three years and two records to nullify the perception that he’s anything but a gangsta-rap puppet caught in a ’90s time warp. 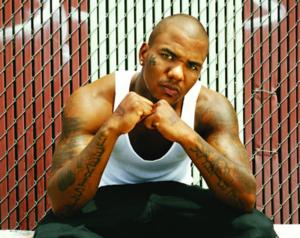 Sure, hip-hop fans have rewarded his two albums with millions in sales and essentially granted him an all-access pass so he could mingle and record with the genre’s rhyming/beatmaking elite. All this, however, can’t legitimize the Game’s do-over, thug-life celebrations.

As expected, the Game’s new album, “LAX,” calls for another redo, not only of his first two discs but for that all-too familiar age gone by. In essence, the album is a blatantly desperate attempt to crown the rapper as the king of West Coast gangsta rap. Despite the Game’s self-confidence, it boasts little that should deem the rapper worthy of the throne. That he has announced that it’s his final album proves he’s set to go out as he came in.

The first major weak point on “LAX” is that the Game still doesn’t lay claim to the title while operating under his own steam. He can’t count on his own microphone skills, beats or lyrical wit to propel a track. Instead, he relies on able assists from hip-hop’s all-stars on the mic and the mixing board. By enlisting hip-hop’s best rappers and producers for musical backup, the album just confirms what many in the hip-hop underground have always whispered about him, namely that he stands on the shoulders of giants.

Matters only worsen as the disc is full of audio evidence that the Game is still smarting from his breakup with his one-time mentors, Dr. Dre and 50 Cent. This unnecessary name-dropping of his erstwhile friends is embarrassing and it, combined with his chosen role as producer’s pawn, won’t make the Game the next Eazy-E or Snoop Dogg. Both of those MCs brought something of themselves to this game — not just their fandom and a shady bio.

While the Game has been living his dream of hip-hop success that he first fantasized about when he was listening to Dre, N.W.A. and Snoop, the last few years haven’t been without their drama either. First, there’s been a string of police run-ins that although they added to his rep, ultimately distracted from the music. Of greater concern was the high-profile falling out with both Dre and 50. This got him kicked out of 50’s G-Unit posse and forced him onto Geffen Records from Dre’s Aftermath Entertainment. While the true story of what went down between the three might never be known, the lesson drawn from this might be not to meet your idols.

Although he was abandoned by his champions, the Game remained true to his fanatical love for gangsta rap’s mid-’90s golden age. He struck out as a third camp unaligned with Dre’s West Coast or 50’s East Coast dominions. His last LP, 2006’s “Doctor’s Advocate,” went platinum on the musical muscle lent by Kanye West, Swizz Beatz, Scott Storch and Black-Eyed Peas’ will.i.am as well as guest turns by Snoop Dogg, Busta Rhymes and Nas. It didn’t, as hoped, establish Game’s own identity, but the starpower kept his head above water.

The Game goes to the same strategy again on “LAX.” Still without Dre or 50’s creative savy, the Game has employed even more big guns to supercharge this record. Lil’ Wayne, Common, Nas, Ludacris, Wu Tang Clan’s Raekwon, Bilal, Blink-182’s Travis Barker and the long-dormant Ice Cube all make appearances. Behind the studio glass, the album’s production team is no less formidable, including return visits from West, Storch and Swizz Beats, as well as the addition of Timbaland, Irv Gotti, Cool & Dre, D.J. Quik and others. Few other rappers can count on such a Murderer’s Row on an album. And yet, what they offer here is nothing more than a star-sponsored imitation of the Dr. Dre sound.

This wrong-headed mentality is immediately on exhibit with “State Of Emergency,” which is just a shambles. First, Game and producer J. R. Rotem mourn the loss of Dr. Dre by stealing his trademark horror-movie keyboard lines (which Dre borrowed from P-Funk’s Bernie Worrell). Do these guys think we haven’t heard “The Chronic”? Or we weren’t listening as Game mention it all the time? Things just get worse when Ice Cube pipes in, trying to resurrect his hardass MC persona. He too seems to think we’ve forgotten all about the embarrassing comedies that he has busied himself with for the last 10 years. His voice is harsher and meatier than before, but what sinks this comeback is that he should have known better than to appear on a track that steals from his old bandmate. The Game and Rotem made their failure complete by adding conry electric piano samples from Phil Collins’ ballad period. This is an example of what a gangsta rapper (and a hip-hip legend) shouldn’t do.

“Bulletproof Diaries” too draws heavily from the G-Funk sound, but from his latter period instead of the Snoop days. Listeners can also hear the Game’s producer nudging him in new directions. This is because Jelly Roll makes Game comfortable by constructing the ideal theme song for his 21st Century Mafioso fantasies. Taut string samples stab forth like the theme from “Psycho” as the bass crawls and mutters underneath the sonic gentility on the surface. Game is on the ball, but still isn’t the ace rhymer that he wishes to be. Raekwon is his more lethal partner-in-crime and the deference that he shows Game as they trade lines raises Game’s standing more than anything he says.

Most tracks on the album just lower one’s opinion of the Game. The record is riddled with corny hip-hop slow songs that his helpers should know they shouldn’t attempt and make the Game just appear as a fish out of water. “My Life” is a piano ballad that will forever haunt Cool & Dre, as well as Lil’ Wayne, who literally sounds like he’s phoning it. Singer Kenisha Cole helps take the cheese factor up the album’s highest levels with “Game’s Pain,” which is an awkward R&B leftover likely adopted from a Destiny Child sound-alike. “Letter To The King” features Nas, but so staggers along that it drowns out his contributions and all those cool Impressions-inspired vocal harmonies with sheer boredom. “Cali Sunshine” has a chirpy bass lick that gives the track some unexpected pluck, which Game squanders with his artless use of cliché and contrived scenarios.

Other producers fair better. The disc’s standout jam is the one where Game takes a backseat to the prolific Kanye and Common partnership. “Angel” is another amalgam of Gil Scott Heron samples and other ’70s funk influences (with a few disco musical motifs) that West has devised as a pimp strut for Common. Game, meanwhile, is shoved into the second and third verses where he can do little but fill time until Common finishes it strong.

Credit should also go to D.J. Quik for coordinating a complicated pastiche of samples that make “Dope Boys” the record’s most aggressive track. Dirge-like pianos, sweet harp flourishes and flip-flopping keyboard squiggles and slaps blend together and oddly compliment each other. The addition of Barker’s live drumming gives the song a punch that the programmed beats just can’t reproduce. Given a gem to rhyme over, however, the Game takes the opportunity to talk about Dre and 50 Cent. So surprising! When Game says, “Tell Dr. Dre to pick up a phone,” we can sense his feelings of loss hidden behind the street image, tats and tough-guy posturing. His feelings for 50 are more hostile and his mention of him takes the form of a veiled taunt that many might miss. For the Game, it’s another blown opportunity.

“The king is back,” the Game yells at the conclusion of “Dope Boys,” but this is an empty claim. “LAX” is just the latest evidence that he’s the king of imitators not gangsta innovators. He believes that by recreating and basking in the sound and attitude of “The Chronic” era, he can lead some sort of renaissance. His obsession prevents him from transcending beyond this dated form.

Perhaps, it all comes down to the Game’s psychology. Despite his frayed relations with Dre, he still clings to his role as protégé and won’t step out as is own and without some big-name behind him.

If this is his final musical statement to the world, he won’t be missed.