The words “teen idol” and “reunion” just don’t fit well together, especially when floating out there in a concert promoter’s thought balloon. 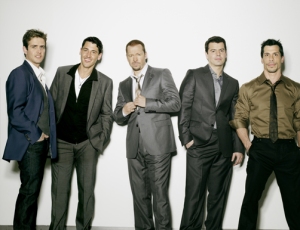 It’s simple: Even the most giggly teenage girls grow up one day. The notion that now 30-something former hunks can recapture unquestioning, youthful devotion from mature women, much less their teen daughters, is ludicrous. And, as we’ve seen before, some comebacks (David Cassidy, anyone?) never fail to underwhelm.

So, it’s with little else than blind vanity that the New Kids on the Block — that adorable relic of ’80s-era prepackaged teen pop — have decided to make another run at music’s big time. This despite the fact that it’s a reunion more likely to be greeted with groans than glee. And that’s even before we even talk about their new disc.

Just when you thought they were gone for good, the New Kids’ reunion album, “The Block,” mostly sidesteps the group’s dance-oriented, uptempo sound and seeks to establish a grownup image for the five-piece as suit-and-tie singing Lotharios. The quintet’s members might be creeping toward middle age, but the record shows that they’ve lost none of their young lust for the ladies, nor their knacks for lunkhead siren songs. Also distressing is their continuing overdependence on skilled production teams for all these lame tracks.

The fact that the New Kids got back together at all underlines the insular thinking that still cloud the members’ self-awareness. Bubblegum singing groups — from the Four Seasons and the Temptations to the Jackson 5 and En Vogue — are as old as the recorded era. However, they can be neatly separated between those talented enough as singers or performers to score hit after hit through the years and those who, based on circumstances in a particular time and place, rocketed to stardom as part of some kind of craze only to crash soon after when audiences realize what they’re really cheering for. The New Kids clearly fall into the second category and yet, now these fellows think they’re greater than they were.

The concept for the New Kids originally sprang from the mind of Maurice Starr, an aspiring songwriter-producer who’d founded them in the mid-’80s as a Boston-based, white-boy clone of New Edition. Starr had helped establish the Bobby Brown-led New Edition, but broke with that quintet just as it began an impressive run of adolescent-themed, Motown-ish hits. With the New Kids, Starr consciously chose white teens with urban roots, but was adamant about establishing a squeaky-clean image for the singers. Their musical comfort zone was edgier than their image or the material allowed. A decade later, Florida impresario Lou Pearlman would follow Starr’s template with the Backstreet Boys and ‘N Sync and come to rule the pop charts to a greater extent.

The New Kids’ own reign over the pop charts in the late ’80s outpaced New Edition’s, although the singers also had to contend with more than their share of ridicule. (Comedian Dennis Miller once called New Kids’ resident bad boy Donnie Wahlberg a “motorcycle guy in a moped band.”) While the New Edition guys were each talented singers/dancers, the New Kids were much more creatures developed by Starr and the other producers, and the group itself was thoroughly a marketing-over-musical creation. The group achieved teenage-girl mania that dwarfed New Edition’s popularity largely because their brand was better and less threatening to young suburbanites.

The years since the 1980s saw the fortunes of New Edition and the New Kids essentially reverse themselves. When New Edition fragmented, Brown and the trio Bell Biv DeVoe achieved even greater mainstream success. Their fusion of pop, R&B and tame hip-hop came to embody a subgenre called New Jack Swing, and for while, they were slightly risqué pop princes. The vocalists’ subsequent reunions as New Edition were greeted enthusiastically despite little new material.

The same couldn’t be said about the members of the New Kids, who broke up during grunge’s upsurge in the early ’90s. The group’s strongest singers, Jordan Knight and Joey McIntyre, attempted solo careers, but both tries quickly sputtered. The other guys didn’t even try. Wahlberg followed the lead of his brother Mark “Marky Mark” Wahlberg into acting and achieved some notice as a supporting player in HBO’s “Band of Brothers” and M. Night Shymalan’s “The Sixth Sense.”

Branded as the New Kids’ rebel, Wahlberg now imagines himself a songwriter. He co-authored nine of the record’s 13 tracks, collaborating with many of those occupying the producer’s chair to make the electronica-laced cuts with a New-Wave aura. While board minder RedOne (Shakira, Michael Jackson) takes most of the album’s jams, there is a pair of tracks gleaned from elder statemen studio rats Timbaland and Teddy Riley. Wahlberg’s name is conspicuous by its absence on the credit listing for those songs.

“I ain’t no phony,” Wahlberg raps in one verse early on in “The Block,” but this would be more believable if we just didn’t know better. Too many of these new songs reinforce long-held suspicions.

The album is filled with pop-chart soundalikes and silly knockoffs, and the overall lyrical/musical concept is designed to appeal to one audience — young-ish women — that listeners should suspect they’re hearing a sales pitch rather than genuine expressions of emotions. The synthesizer-soaked “Summertime” is a cornball nostalgia trip. It’s preceded by “Big Girl Now,” a Timbaland-production ripoff with Lady Gaga playing a Gwen Stefani role as cutesy foil. That, believe it or not, is better than the smooth delivery of “Sexify My Love,” which is the newest and worst genre ever conceived: easy-listening rap.

Of course, no one should forgot what Starr did with the New Kids much to New Edition’s chagrin. That’s what makes the members of New Edition’s guest turn on “Full Service” sort like seeing Little Richard dueting with Pat Boone. Any bad blood between this pack of vocal prima donnas doesn’t distract these guys from falling all over each other to be the most desperate, pleading crooner there. (Bobby Brown is apparently AWOL on the track as he can’t be heard begging with the others, but that shouldn’t be a surprise given his track record.) Musically, the track is far more tolerable. An electronic, xylophone-like rhythm creates a sense of urgency and a bashing bass drum beat finish the illusion of a sexy club jam. This wouldn’t be so bad except for that parade of voices that suggest the dance floor has been taken over by creepy pickup artists.

With “The Block,” the New Kids resurrect neither the dynamism of their early years nor establish themselves as anything except the musical equivalent of the guy who’s just a bit too old to be hanging out at the club. These guys are professionals and had greater talents at their disposal than they let on. They have been around the block once already and that’s enough for us all.